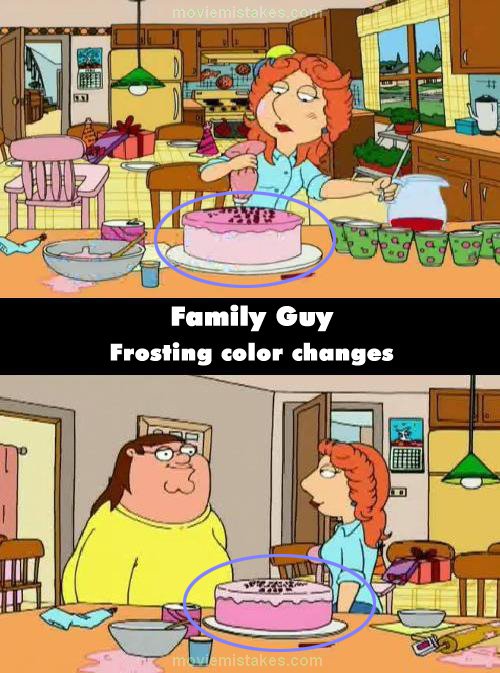 Continuity mistake: In the flashback of Lois making a birthday cake, the cake has dark pink icing on the top and light pink icing on the sides. When Peter comes in to talk to Lois, the two colors have reversed. (00:01:35) 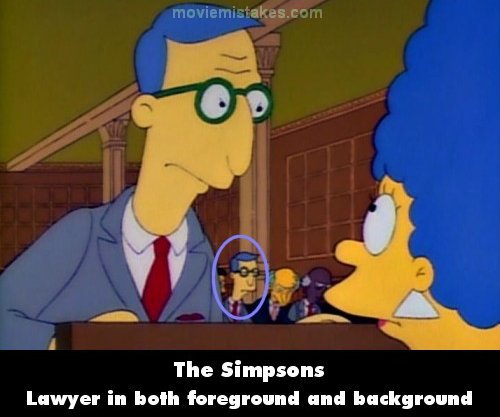 Other mistake: When Marge is being questioned, before she says 'If you don't have anything nice to say, then don't say anything at all', there is a shot over her shoulder looking at the blue haired lawyer. Not only is he (the lawyer) there directly in front of her, but he is also sitting on the bench with Burns. In all other shots his chair is empty as it should be. 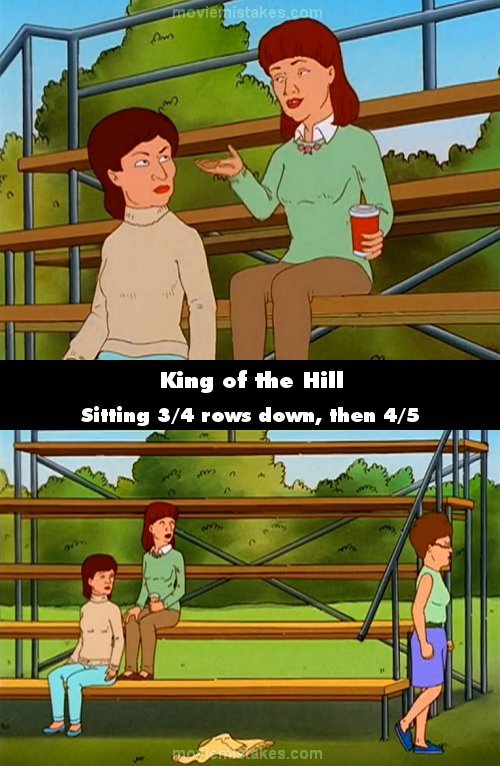 Continuity mistake: The two women near Peggy, who are sitting on the benches in the stands, are seated on the fourth and fifth levels in the wideshots, but in the close-up they're seated on the third and fourth levels. 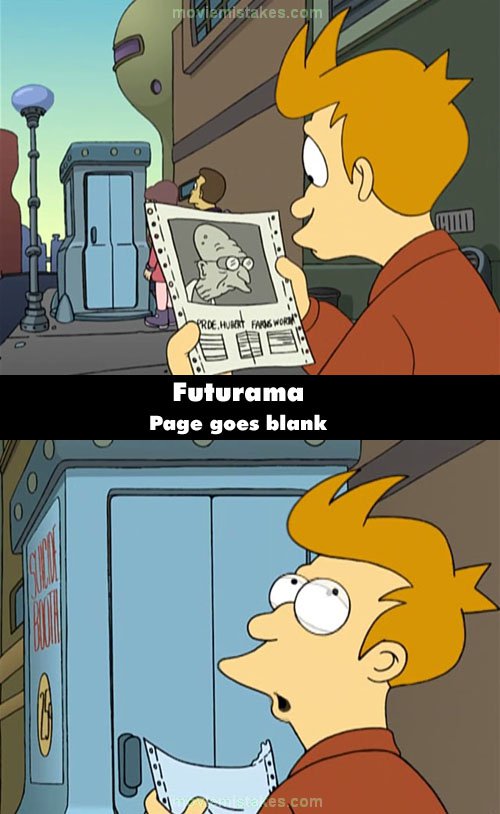 Continuity mistake: When Fry is queueing for the booth, he opens the piece of paper, showing the picture and writing. Just before he steps in to the booth, it's changed colour and gone blank, then in the next shot it's back as before. (00:07:45) 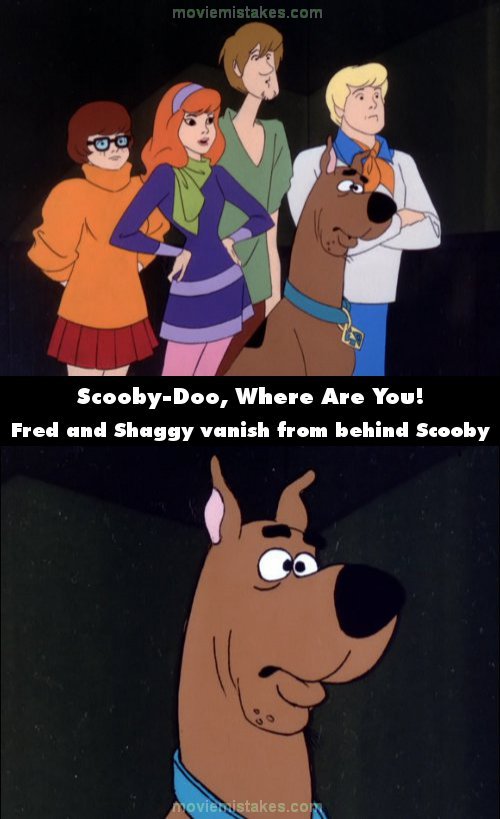 Continuity mistake: After Candy and the stunt man quit the movie, Mr. Maxwell says he has to withdraw his job offer to the gang as it's too dangerous. As the gang is shown, Scooby is sitting in front of Shaggy and Fred. It cuts to a close up of him as he gets excited about this, and suddenly Fred and Shaggy have vanished. (00:06:10)

More Scooby-Doo, Where Are You! mistake pictures 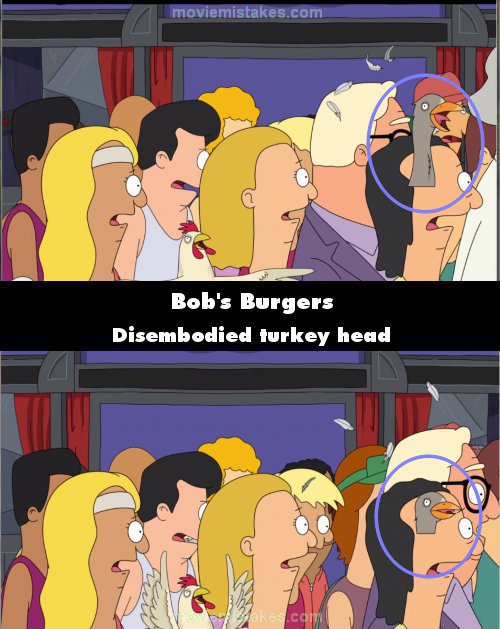 Other mistake: After the turkeys start attacking in "The Running of the Turkeys", Mr. Fishoder and his brother start running. In that clip a Turkey pops out the side of a guy's head. Look in the mid lower right side. Looks like a design error. Pretty big error, no slow down needed to see it. (00:05:20) 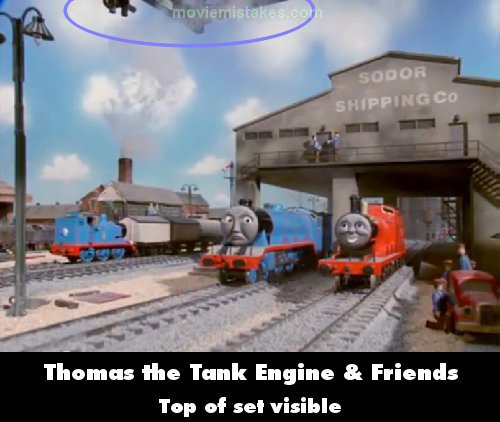 Visible crew/equipment: In the scene where James pulls up beside Gordon, studio equipment is visible in the top portion of the screen. 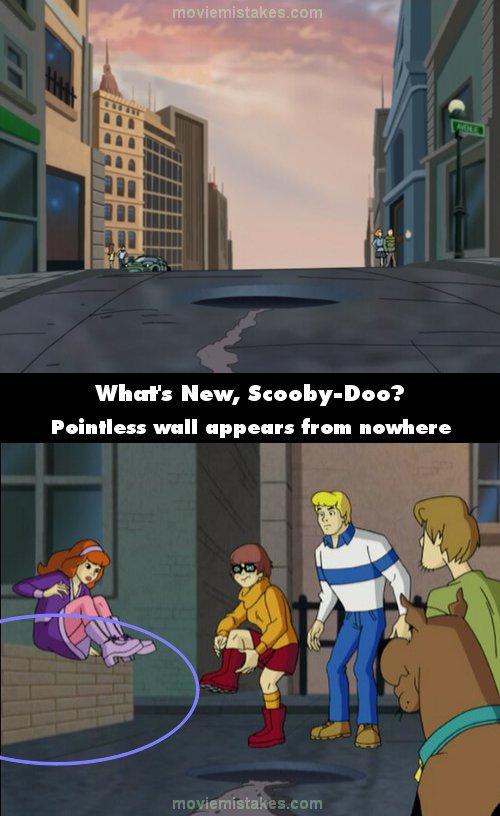 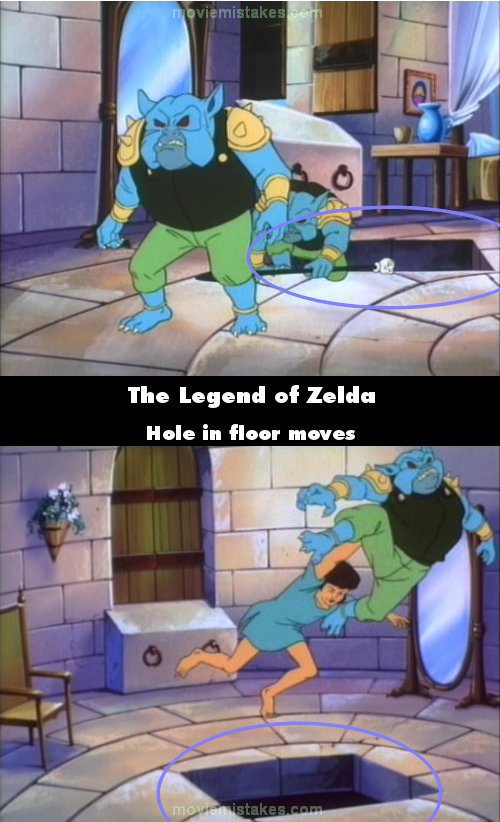 Continuity mistake: When the Moblins attack Link in his room through a sort of trap door, the hole that is the door keeps changing locations, shapes, and the tiles around it all throughout the fight. Some points even disappearing entirely. (00:01:25 - 00:03:40) 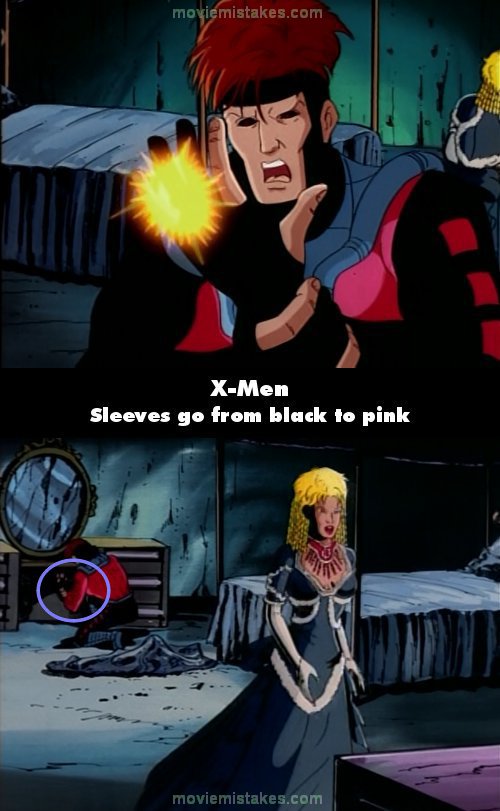 Continuity mistake: Gambit's sleeves turn from black to pink when Bella Donna reveals to him that she double crossed the Thieves Guild. (00:13:25) 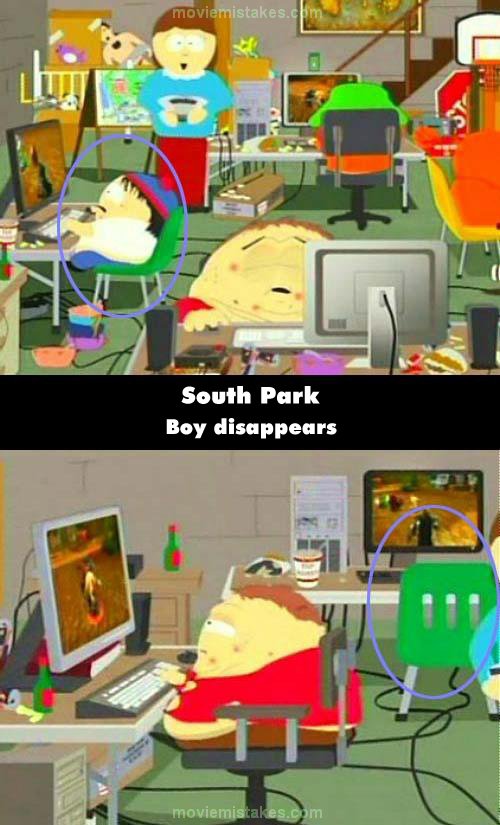 Continuity mistake: When Liane comes down after Eric says "Bathroom", you can see Cartman, and to the left, Stan. However, when the camera instantly changes to a side view, Stan is no longer there. 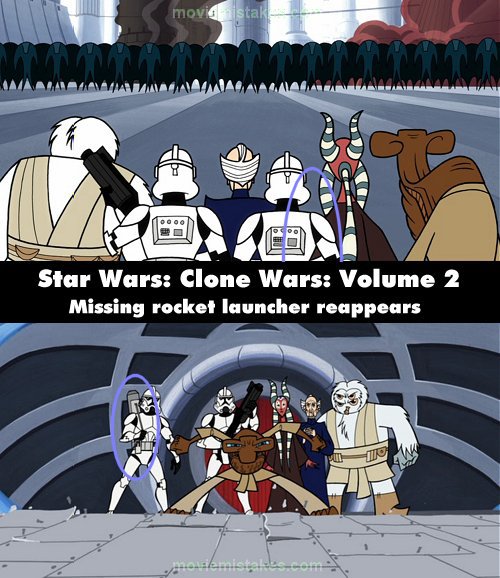 Continuity mistake: When Palpatine and the others exit the elevator, a rear shot of their group shows that one trooper holds his rifle, but the other is missing his rocket launcher. But when seen from the front again, this trooper has the very obvious launcher hanging from his shoulder, behind him. (00:40:00) 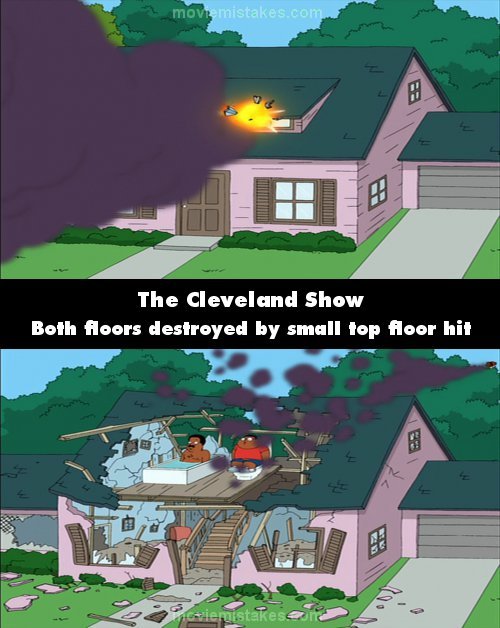 Continuity mistake: When Peter launches himself off a firework into Cleveland's house he hits the top floor and completely misses the ground floor. Yet the entire house is damaged including the ground floor. (00:01:25) 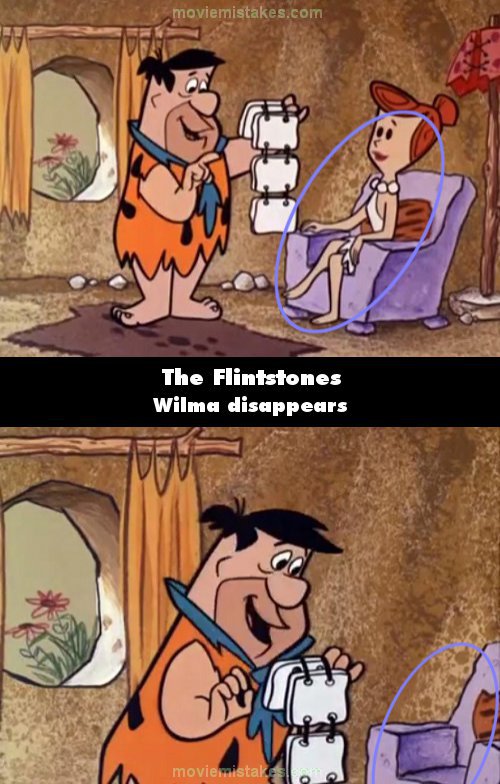 Continuity mistake: When Fred is reading his letter about his position being accepted at the Stone Valley Inn, you can see Wilma is sitting in the chair next to him, but in the next shot the chair is empty and Wilma is nowhere to be seen, then she reappears in the chair. 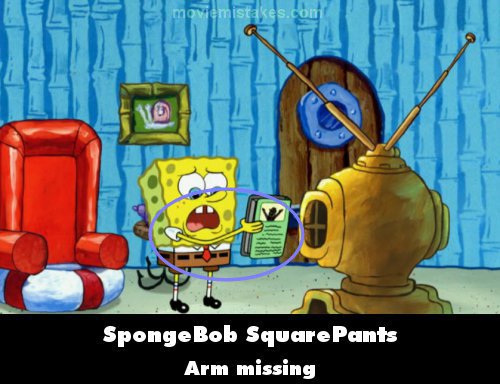 Revealing mistake: In "Not Normal" when SpongeBob says "Hmm. This video tape should help," his left arm is missing. (00:01:25) 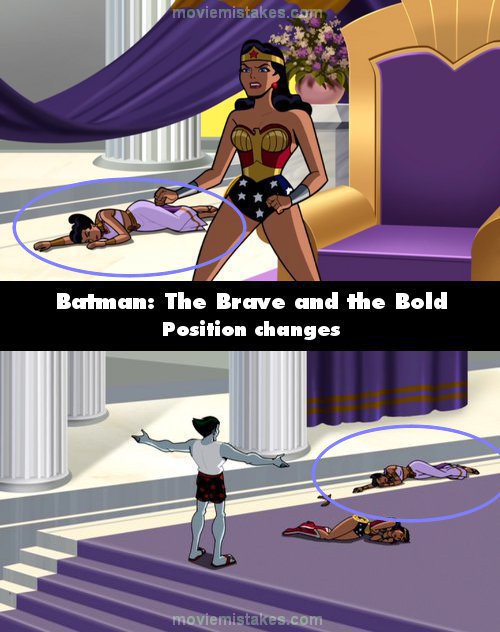 Continuity mistake: When Joker zaps Wonder Woman and her mother, they are both standing in front of their thrones and fall forwards. But when Wonder Woman stands back up, her mother, still unconscious, is suddenly off to the side and behind the thrones. (00:11:35)

More Batman: The Brave and the Bold mistake pictures 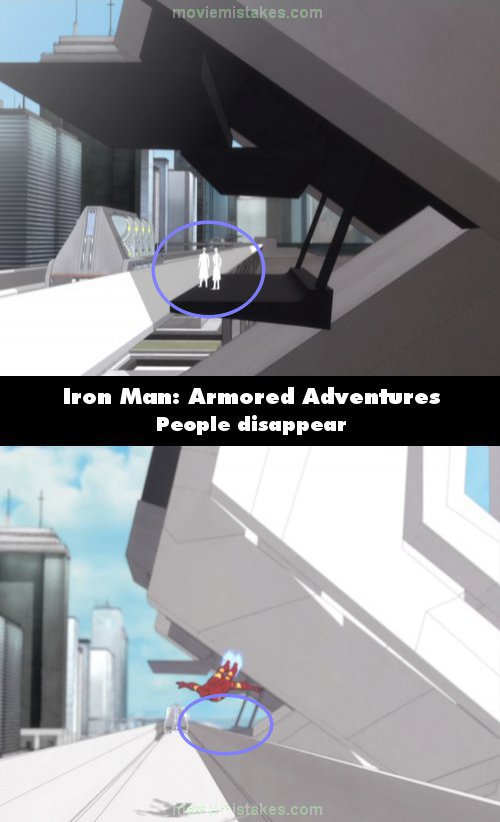 Continuity mistake: When Tony says he has to stop the train from hitting the building’s power generators, the camera zooms in on a train car at the entrance of Stark Tower by the tracks that has the generators on it, and there are two Stark International employees standing on the balcony beside it dressed fully in white. Only a couple seconds later, Tony flies down there to cut off the train, and suddenly the two guys have vanished. (00:18:00) Other mistake: The newspaper article that features Tintin and Captain Haddock at the end of the episode is a flipped shot, as shown by the text that has been reversed. (00:43:35) 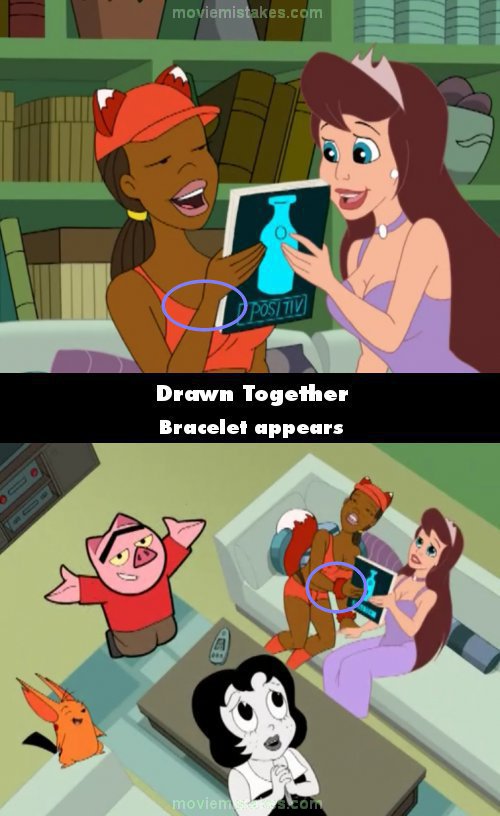 Continuity mistake: When an Entertainment Weekly magazine falls onto the table and Foxxy and Clara both hold it. If you look at Foxxy's hand you see that her furry bracelets suddenly disappear and then reappear. 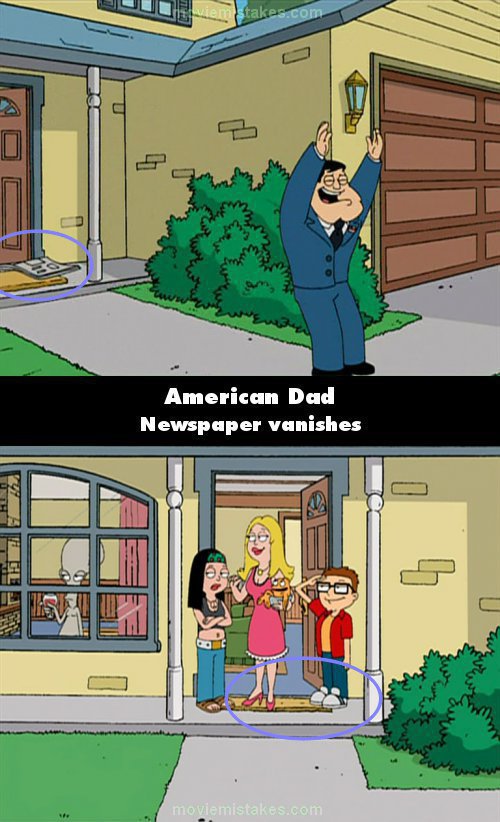 Continuity mistake: In the opening titles (for series 1-3), Stan runs outside and picks up a newspaper. He reads the headline and throws it back on the ground. But by the time Stan drives off, the newspaper has disappeared. (00:00:10)