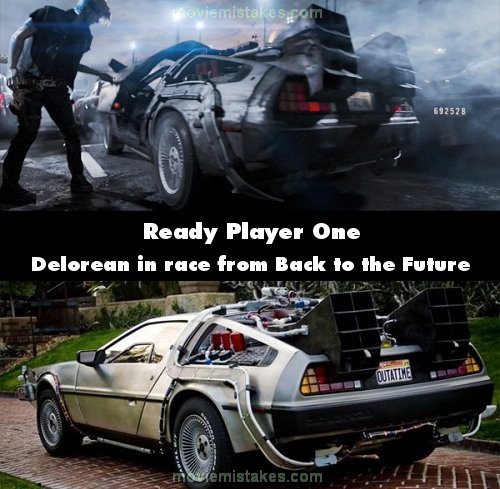 Trivia: The car that Parzival uses in the race is the DeLorean, complete with all it's customization and advances, from the Back to the Future movies. Steven Spielberg, the director of Ready Player One, was also the Executive Producer of the Back to the Future trilogy with his company Amblin Entertainment. Spielberg only allowed the DeLorean to appear as a reference and tribute to BTTF director Robert Zemeckis, rather than himself. Despite Spielberg's overwhelming impact on pop culture throughout the decades, direct Spielberg references were rather deliberately omitted from "Ready Player One" by Spielberg himself. Ironically, he intended to include references to "Close Encounters of the Third Kind" (Spielberg's second blockbuster after "Jaws"), but he couldn't negotiate a licensing agreement with Columbia Pictures and Warner Bros. (00:11:25)