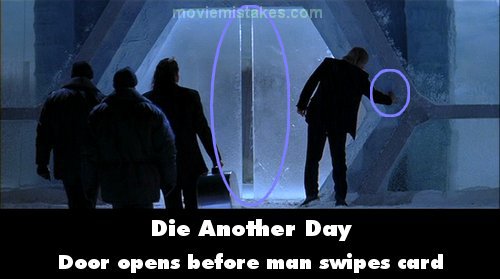 Revealing mistake: When Bond is in the car following the goons heading into the facility, it shows the techie guy scan a card and then swipe it to open a door. Before he swipes it, the door is already opening. (01:13:15) 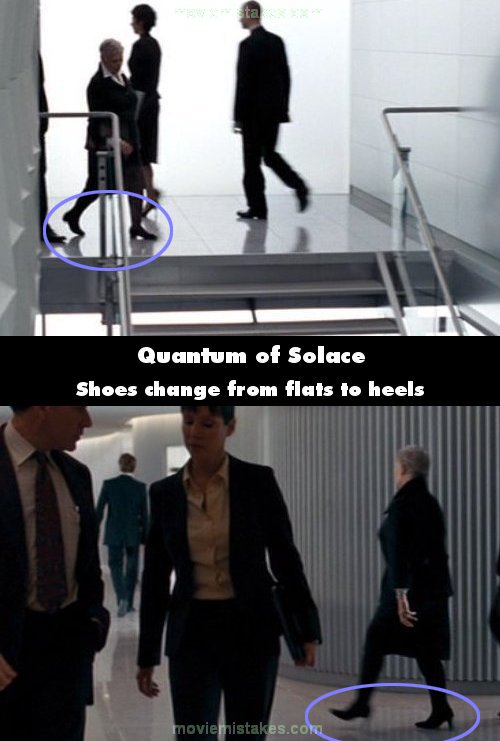 Continuity mistake: When M meets Bond near the beginning of the film, as she walks down the stairs she is wearing flat shoes, but as she gets to the bottom she is wearing high heels. (00:16:45) 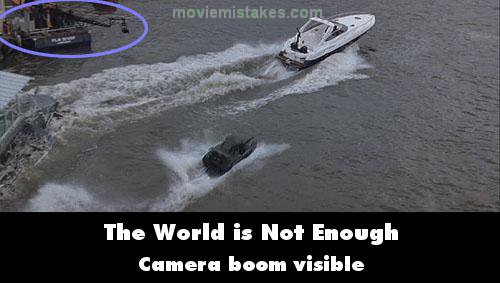 Visible crew/equipment: Watch for the boom when the cigar girl's Volvo boat swipes the building (it's on the top left of the screen on the widescreen version).

More The World is Not Enough mistake pictures 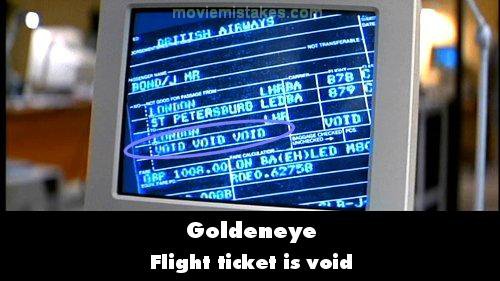 Revealing mistake: Whilst in Q's workshop, Bond places his envelope on Q's X-Ray Document scanner. If you pay close attention to the screen (it's easy to notice anyway) his flight ticket has got VOID written on it 4 times... (00:51:54) 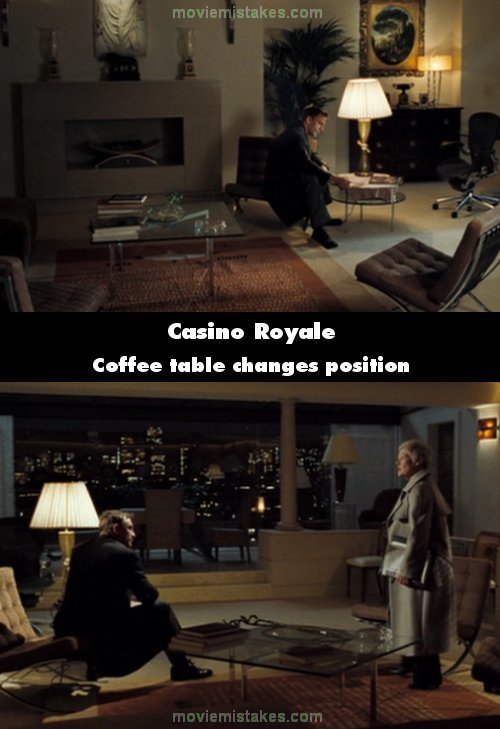 Continuity mistake: During the first scene in M's flat the glass coffee table changes position. When we first see the coffee table it is square to the rug and fire place, however in the next shots it has been moved approximately 45 degrees to the right. (00:24:20) 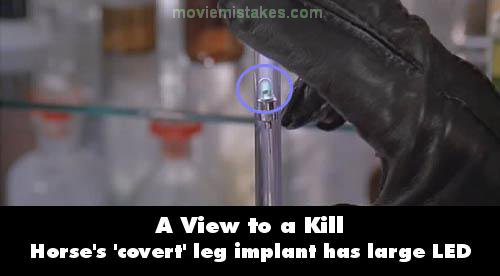 More A View to a Kill mistake pictures 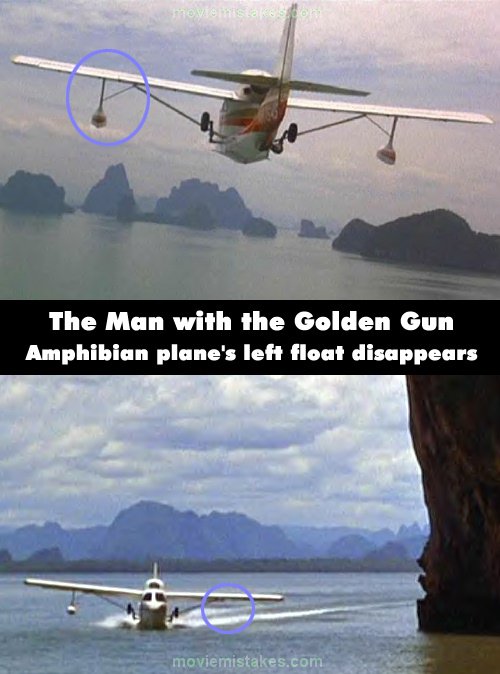 Continuity mistake: When Bond is flying over China and landing on the sea by the Scaramanga's island you can see that his plane has two floats - one on either wing. But in the shot where he is heading for the beach it is clearly seen that the left float has gone! (01:28:40 - 01:30:55)

More The Man with the Golden Gun mistake pictures 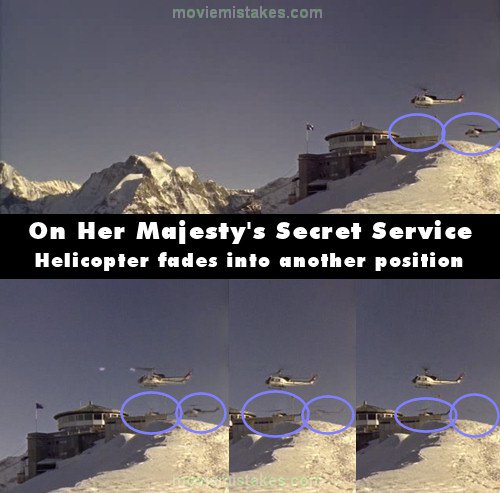 Other mistake: In the scene when the helicopters arrive over the research center, look at the heli in the bottom right - it just fades out, while one on the left materialises, and the one in the middle changes position. Notice that after all the helicopters have changed place, you can see the helicopter that faded out appear on the helipad (02:25:25) 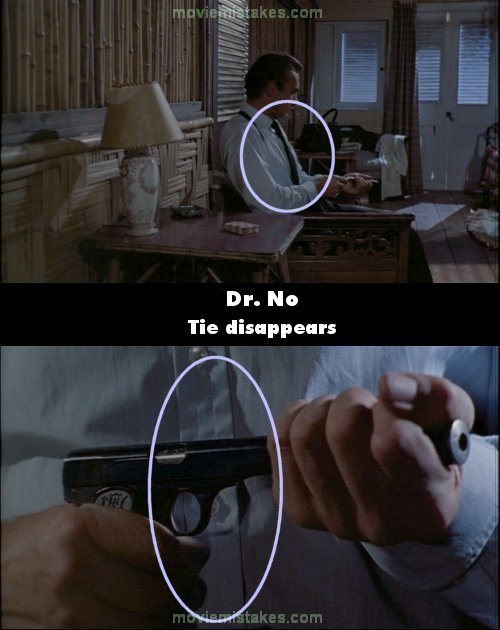 Continuity mistake: Bond sits down by a table, puts some cards down, and pulls his gun out. He's wearing a tie, but when we see a closeup of him screwing on the silencer, his tie disappears. (00:54:40) 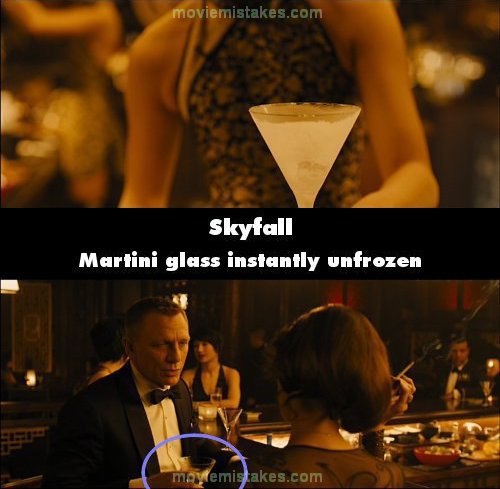 Continuity mistake: While talking with Severine in the casino bar, Bond gets his martini in a frozen glass. He picks it up, the camera's point of view changes, and the glass is instantly completely unfrozen. (00:57:15) 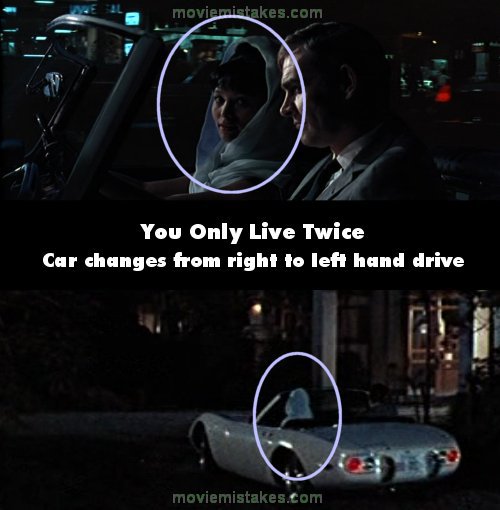 Continuity mistake: When Aki drives James to see Tiger and when she collects him from Osato Chemicals, her car changes from left hand to right hand drive as the camera follows them along. 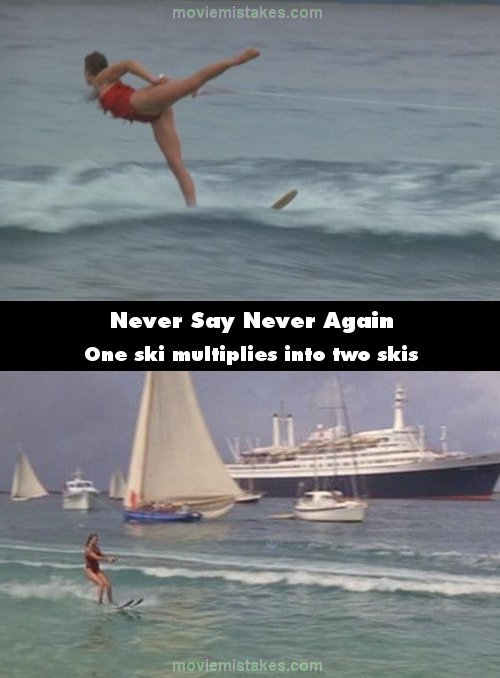 Factual error: When we first see Fatima Blush she is waterskiing. She is doing several stunts which are only possible with one ski, the most notable being skiing backwards with one foot in the air. But when she releases the tow rope and skis up the ramp into James Bond's arms, she is on two skis. (00:45:55) 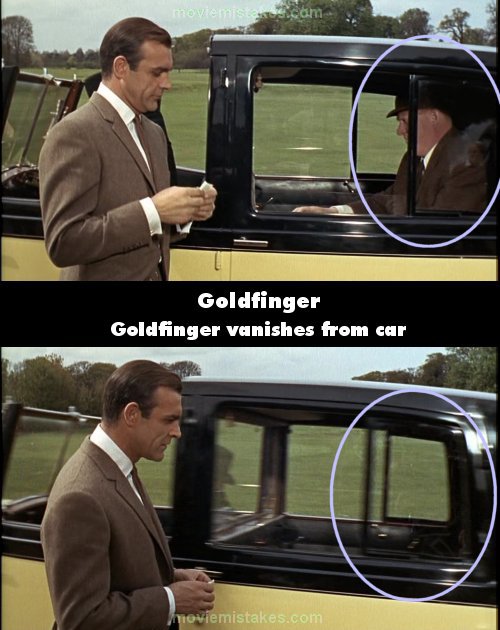 Continuity mistake: When Oddjob drives away from the golf course, Goldfinger is not in the back of the car for some reason, even though they show him in the car earlier. (00:32:00)

Suggested correction: Goldfinger is still in the car - he has sat back in his seat and the camera angle makes it look like he's vanished. The picture shown shows Goldfinger leaning forward to talk to Bond, then he sits back when the conversation finishes.

In this instance it does not have to do with camera angle. When Goldfinger gets in the car and the door is left open, we can see the seat's upright back portion where he is sitting in relation to the rear side windows, and there is not much space between them. Goldfinger is a rather rotund fellow, so even when he leans back in the seat we should still be able see him when looking through the right side of that double window, due to his stoutness. In a medium shot Goldfinger says goodbye to Bond, then it cuts to semi-closeups of Bond and Oddjob, so when we're back to another medium shot of the car, the actor was simply not in the car during the filming of these specific takes, for this medium shot. Note, after Oddjob crushes the golfball, in the next medium shot as the car begins to drive away, all the people who had been standing on the fairway in the background in previous shots have vanished (no time for them to have walked away). 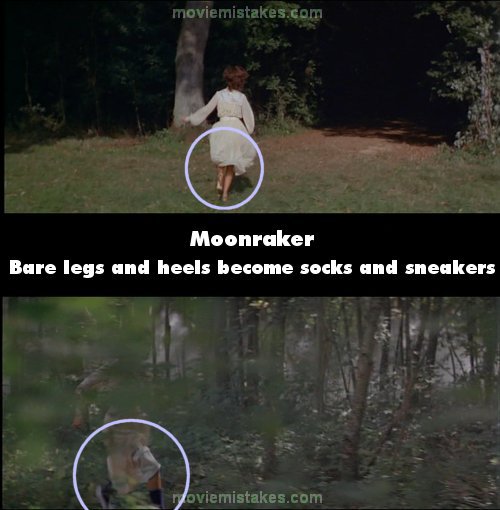 Continuity mistake: In the scene where Drax's assistant, Corine Dufor, is being pursued to her death by his doberman dogs, she starts off with bare legs and high heels, but a couple of seconds later she's now wearing trainers and blue socks. 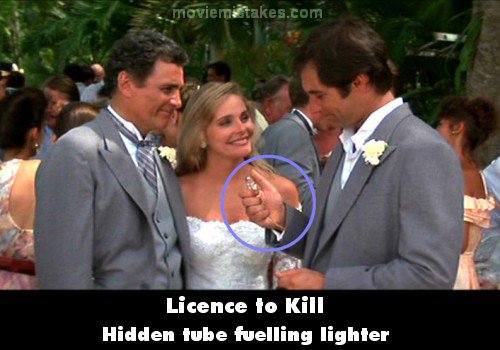 Visible crew/equipment: After Bond received a lighter from Felix and Della, he uses it and the flame is big. In the beginning and the end, you can see a tube is connected to the lighter and the tube goes into his suit. (00:15:00) 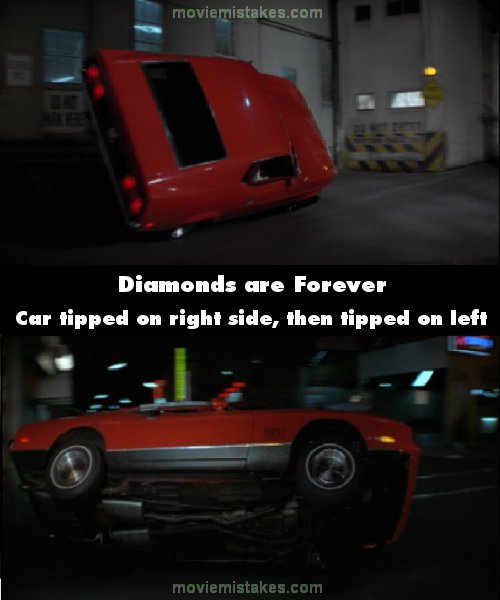 Deliberate mistake: The famous car chase ends with Bond's car tipping up on its right wheels to fit through a pedestrian path. However, when it emerges the other side, it's tipped on its left wheels. When the car enters the alley this was filmed in a studio. When the car exits the alley this was filmed in Vegas. The first few times the exit was filmed the car emerged on the correct wheels but the shots were unusable because of the crowds in the background watching the filming. This shot was temporarily abandoned and eventually re-filmed with a different stunt driver who famously performed the stunt on the wrong wheels. Realising this, the producers filmed a somewhat clunky insert shot featuring a close-up of Sean Connery and Jill St John which shows the car tip back onto four wheels and then up onto the opposite two wheels, even though the alleyway would be too narrow to manage this. 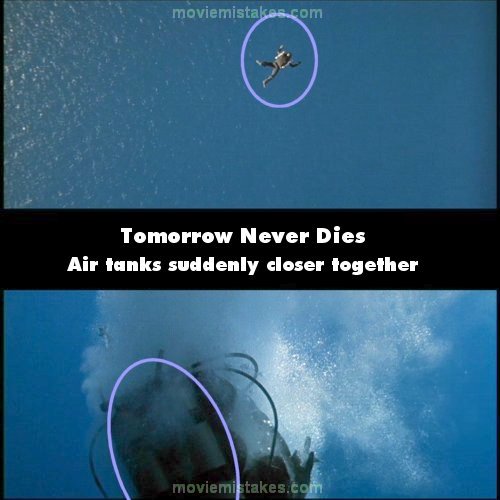 Continuity mistake: When James has just jumped out of the plane, he has a diving rig that is somewhat different to the one he has when diving on the wreck of the Devonshire. In the water he wears a twinset manifold air-bottle rig. While skydiving the rig was not manifolded and the bottles were in a different position on his back. To change between the two requires some work with a tool kit, preferably on dry land. 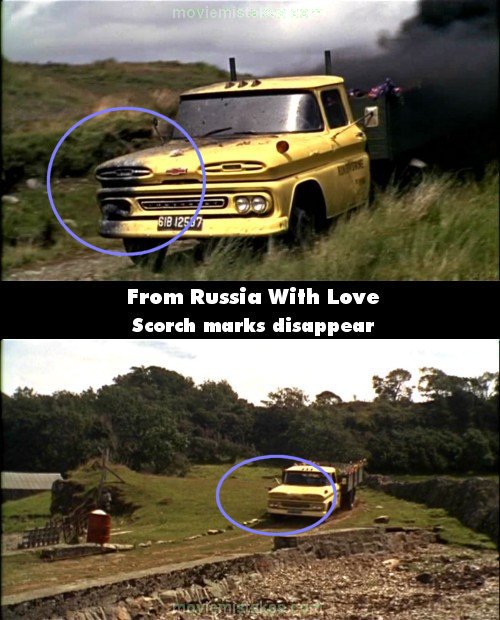 Continuity mistake: When JB is driving the truck and is being bombed with grenades from the helicopter the truck gets smoke blackened, but when he arrives at the speedboat all the smoke marks have gone. 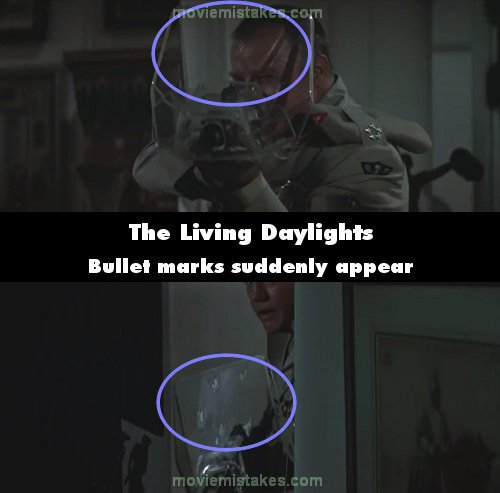 Continuity mistake: When Bond has his final confrontation with Whitaker, he empties his PPK at him in an attempt to take him down. In the process, he hits the gunshield on Whitaker's weapon five times, and it remains clean. But when Whitaker rounds the corner a few seconds later, the impacts from the PPK bullets are suddenly visible on the shield's surface. 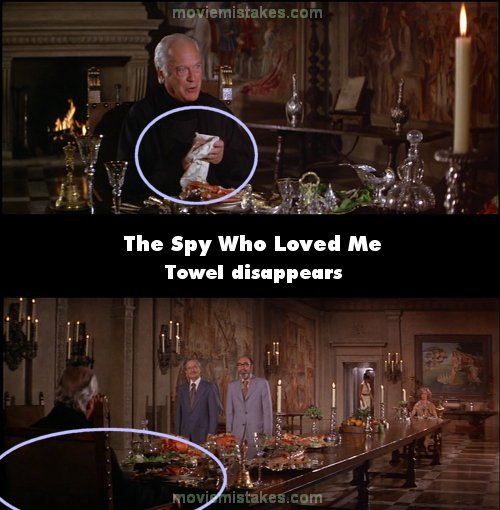 More The Spy Who Loved Me mistake pictures