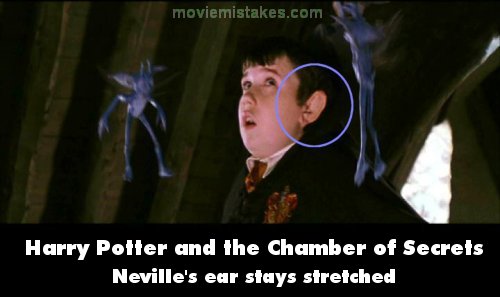 Revealing mistake: In the scene where the students are in Professor Lockhart's Defence Against the Dark Arts lesson you see that when Professor Lockhart lets out the Cornish Pixies, two of the pixies pull Neville Longbottom up by his ears and hang him on a chandelier. Because the pixies were computer-animated, they had to put clips behind Neville Longbottom's ears to make it look like he was being lifted up by the pixies. When he was dropped onto the chandelier by the pixies, you see his ears are still in a stretched position where the clips are. (00:37:00)