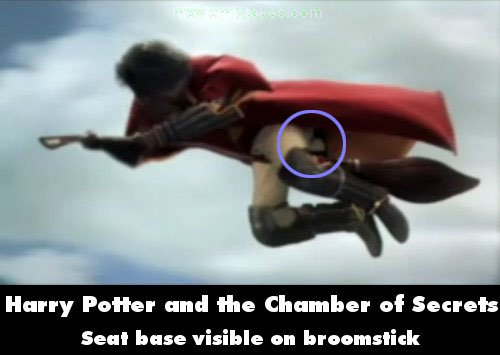 Visible crew/equipment: While Harry is chased by the Bludger, Hermione says, "No! Even with a proper wand you could hit Harry..." Three shots later, as Harry passes the blue Ravenclaw tower, the back of his robe flies up and the metal base of the seat he sits on is perfectly visible. Some shots are filmed vertically, as he sits on the attached seat with the upright broomstick in front of him, but then edited with the background plate to look as if he is lying on the horizontal broomstick. Hence the need for a seat perpendicular to the broomstick. (00:55:00)