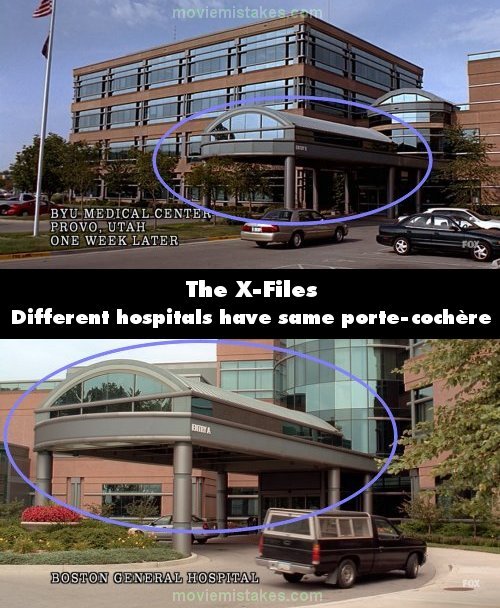 Revealing mistake: The establishing shot of Boston General Hospital at The End of the episode shows the same porte-cochère that was used for the BYU Medical Center in Provo, Utah eight episodes earlier in "Roadrunners." It appears they just digitally inserted this portion of the building over different facades. (00:40:00)

Suggested correction: These are two different porticos. The columns in the Boston picture show concentric grooves, and the fascia on the front of the roof structure is smooth and rounded. The Provo portico has smooth columns and the front fascia is composed of flat rectangular panels. In both pictures the porticos seem to be well-matched to the building structure and landscaping. It's unlikely that the production would have gone to the considerable expense (in the 1990's!) of a digital enhancement.

I could have worded the entry better, but while it's not the exact same portico, it appears to be the same building, but different entrances. The two structures have the exact same kind of writing on the right side and the overall design of the structures is remarkably similar, with some subtle differences in the columns and fascia, as you pointed out. Seems highly Improbable that a building in Boston and another in Utah that are not supposed to be affiliated with each other would look so alike.

It's also worth pointing out that the shot of the BYU Medical Center from Roadrunners showed the Kansas state flag flying outside the building, suggesting that the crew either had stock footage of the building, or they happened to be in Kansas and filmed the building in question. It's highly unlikely they went to the effort to find stock footage or actually went to a different building with a similar looking portico for the sole purpose of using it as an establishing shot of a different hospital in another episode.

After studying the photos again, I would have to agree that it is probably the same building, probably with an addition added to closely match the original construction. As to the improbability of two hospital architectures being so similar, I would reply that this may be common. I had occasion in the 90s to visit a hospital in East Lansing Michigan and later one in Alexandria Virginia that were virtually identical and owned by different health care systems.

All the pictures for The X-Files