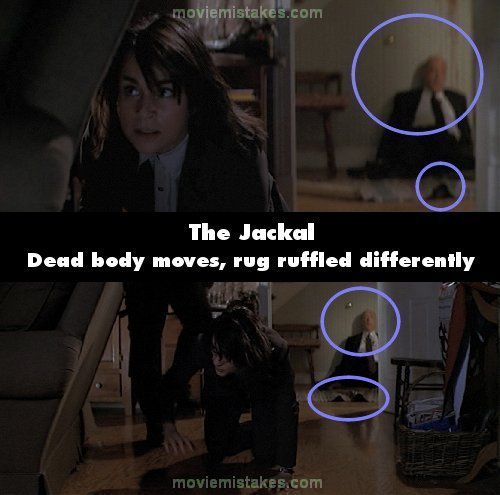 Continuity mistake: The Jackal kills Witherspoon, who stumbles back against the stairwell wall and is in a sitting position. He's seen behind Koslova as she's kneeling behind the couch trying to shoot the Jackal back. Witherspoon's body is then shown again after the Jackal shoots Koslova and is approaching her as she tries to crawl away. Witherspoon's body changes positions in several ways. Most notably, his head is now sitting more straight up and closer to the doorknob. His legs are bent up more with his feet now almost touching the table leg. And also the rug he is on is bunched up more, having only 1 large bump before, but now having two. (01:24:50 - 01:25:20)