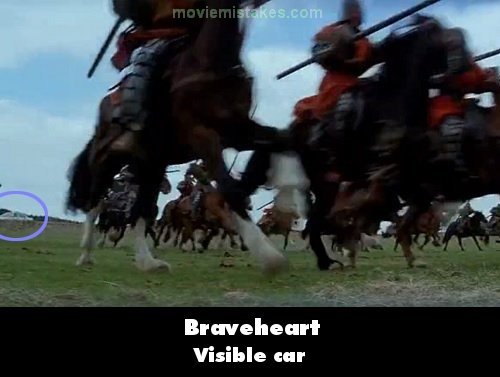 Visible crew/equipment: During the "full attack" at the start of the Battle of Stirling Bridge, Wallace repeatedly shouts, "Hold," and in the wideshot right before Wallace finally shouts, "Now!" as the horses gallop towards the right side of the screen, we can see a white car at the left side of the screen. Viewed widescreen version. (01:27:15) 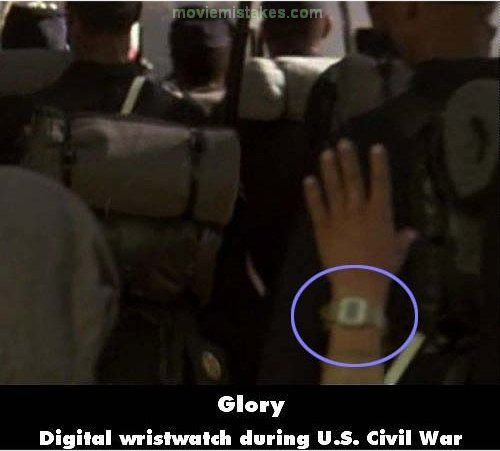 Revealing mistake: When the 54th Mass. marches past a liberated plantation some black children wave them on. One of them is wearing a digital wristwatch. 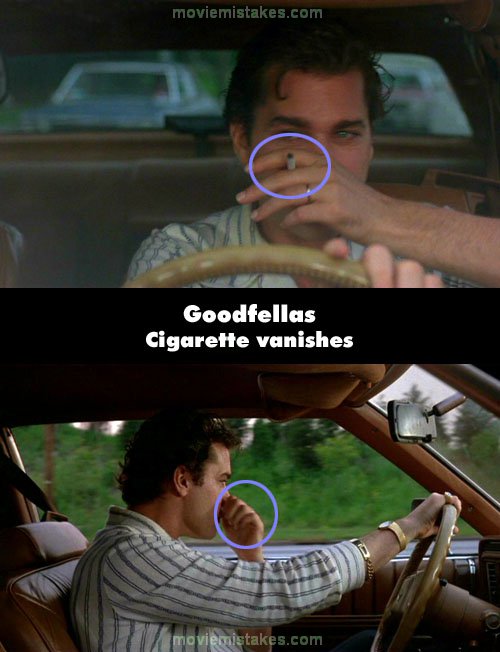 Continuity mistake: When Henry has just shown De Niro the guns and he returns to his car, you see him light up a cigarette. When the shot changes the cigarette has vanished. (01:54:45) 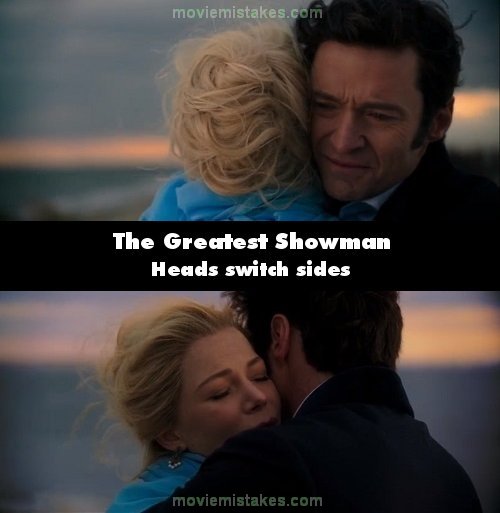 Continuity mistake: When Barnum goes to see Charity by the beach at the end of the film, they embrace. As the camera shows a close up of their faces Charity's head is on Barnum's right shoulder, but when they reverse the shot to show her expression she is now on his left shoulder. (01:30:10) 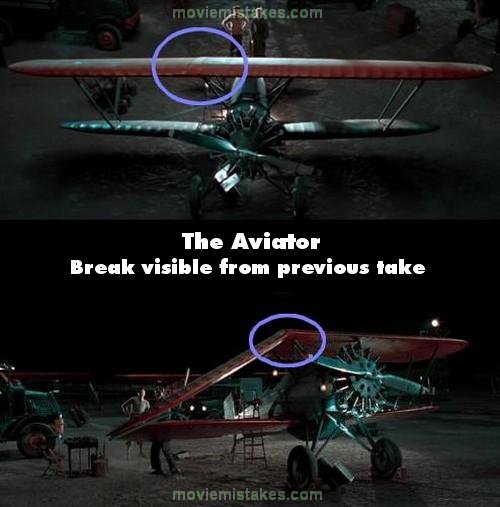 Revealing mistake: During the filming of 'Hell's Angels' Howard gets the idea to build a single wing mono plane. He and another take an axe and smash the support holding up the upper wing. If you notice the upper wing is already broken, hinged and a very poor covering has been laid over the joint. It is very obvious and noticeable in a few shots leading up to this. 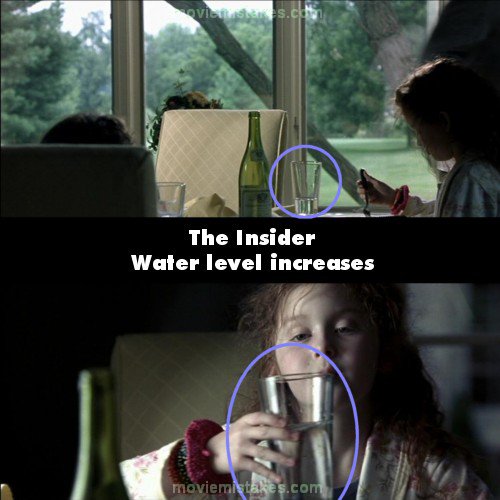 Continuity mistake: Check the glass of water on the table in front of the little girl. When they shoot from afar, you can see the level of the water is lower than when she actually picks it up to drink it. (00:12:15) 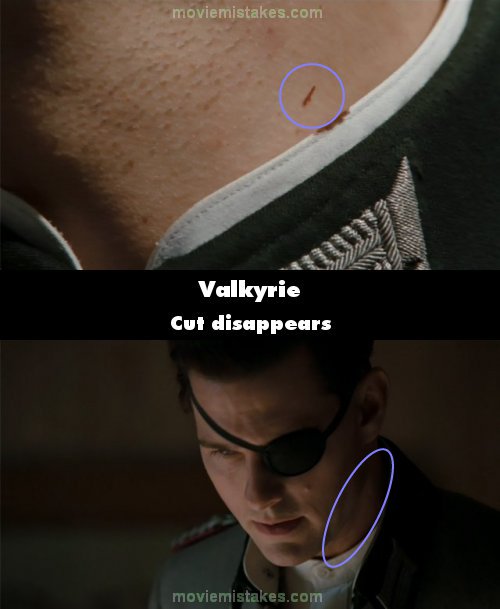 Continuity mistake: On the morning of July 20, Stauffenberg cuts himself while shaving, leaving a noticeable mark on his neck. After he arms the bomb at the Wolf's Lair, the cut disappears. (01:02:40 - 01:06:15) 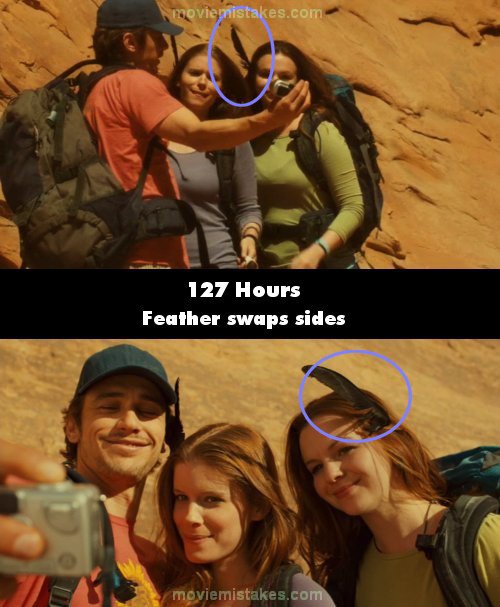 Continuity mistake: After swimming in the pool, Aron, Kristi and Megan pose for a picture. The feathers in both girls' hair are on their right. When Aron presses the shutter on the camera, the feather in Megan's hair has switched to her left. 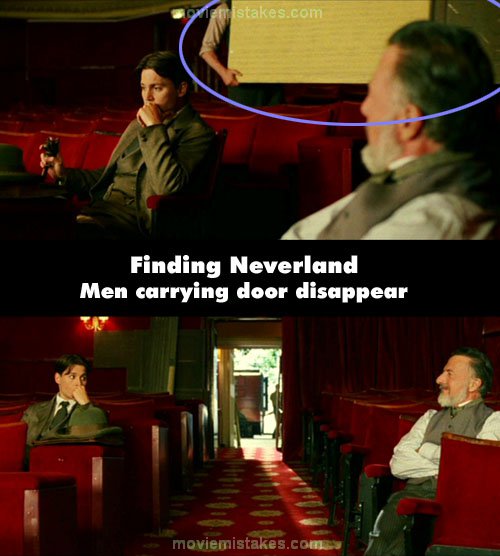 Continuity mistake: As Barrie (Depp) and Frohman (Hoffman) are sitting in the theatre shortly after Barrie seeing all the sets being removed from the theatre, there are a number of guys removing what look like set doors. The first two guys that walk behind Barrie make a large distance between seeing them and walking down the hall. A few seconds later two more guys just walk past the back of Barrie and in the very next shot they have disappeared. (00:15:40) 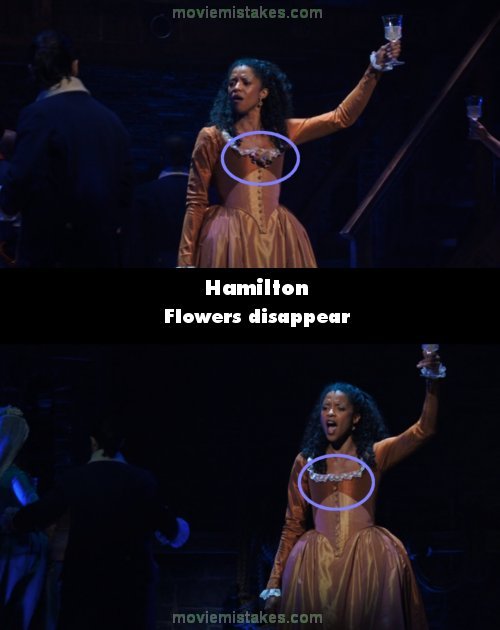 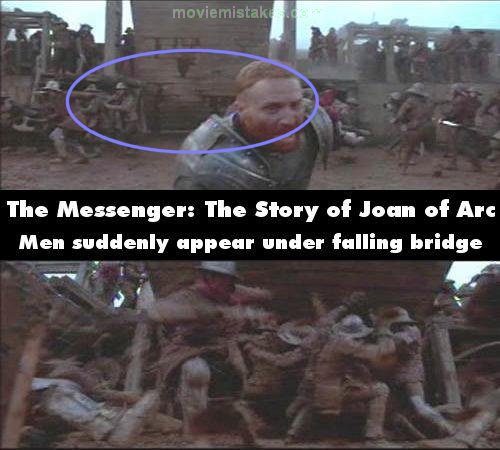 Continuity mistake: After the 2nd battle (when Joan got an arrow in the chest) she wakes up her soldiers the next morning and uses the tower to break down the English bridge. At the bottom of the bridge when its falling (inside the fort), no one is near the bridge when it's falling except the guy who bad-mouthed Joan earlier that morning. Then in another shot there are at least eight guys getting crushed by the bridge.

More The Messenger: The Story of Joan of Arc mistake pictures 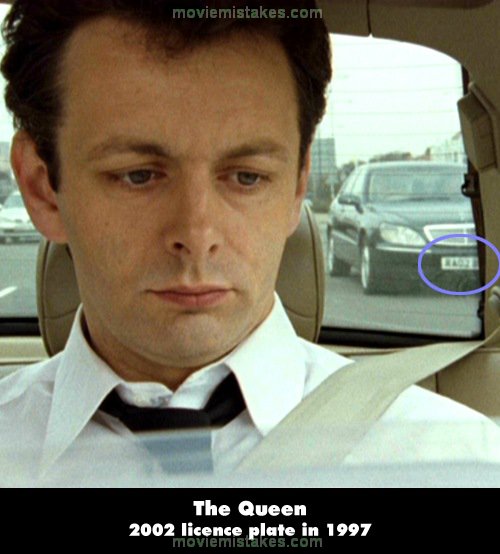 Revealing mistake: The film is set in 1997 the year of Diana's death. However there is a scene in where Tony Blair is being driven in a car and you can see a Mercedes through the rear window with an '02' number plate indicating a 2002 model vehicle. 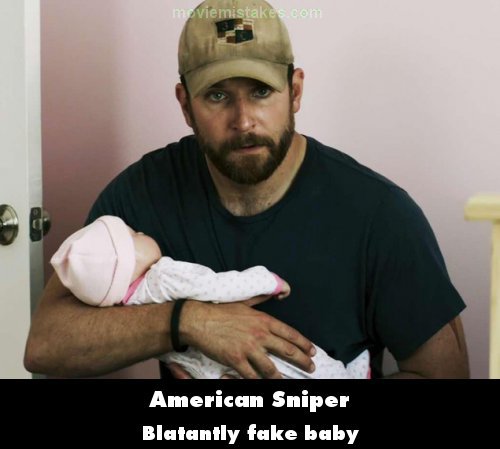 Revealing mistake: About 3/4 through the movie, Bradley Cooper and his wife are talking in a bedroom or nursery. He takes his daughter and holds her - the baby is clearly fake. 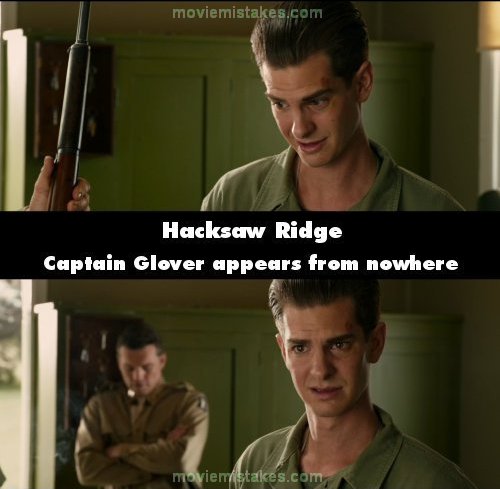 Continuity mistake: When the Privates are having their furloughs authorised, Colonel Sangston walks in with Corporal Cannon. Only those two men walk in. Corporal Cannon moves from the doorway to give Desmond Doss his rifle leaving no-one by the doorway. After Desmond refuses to touch the rifle, the Colonel shouts at Desmond. Out of nowhere Captain Glover mysteriously appears in the doorway. (00:48:40 - 00:50:10) 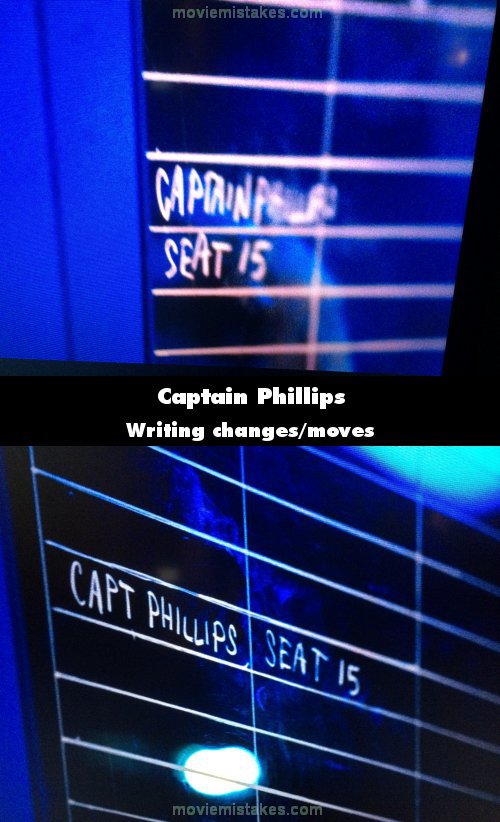 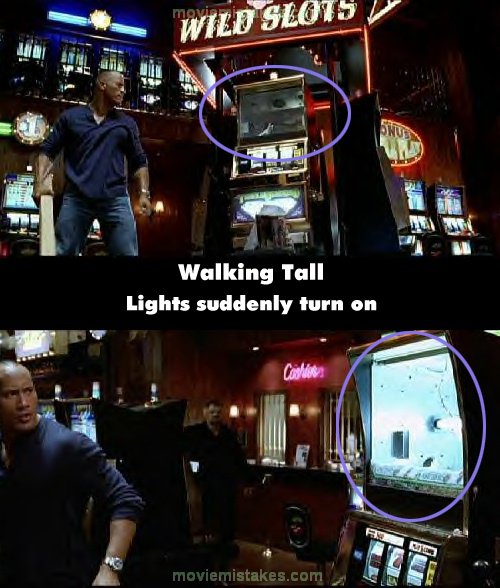 Continuity mistake: When Chris is hitting the slot machine in the Casino, we see that the cover on the machine comes off, then the lights are off. But when the shot changes, the lights are on. (00:38:15) 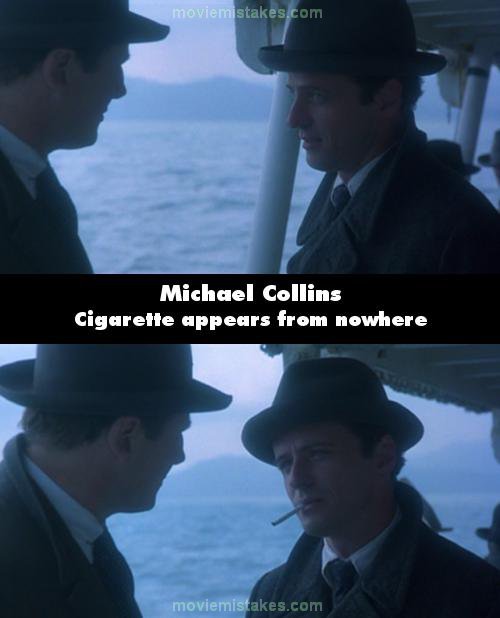 Continuity mistake: Early in the film, Michael talks to Harry Boland on a boat. During this scene, a cigarette appears in Boland's mouth that was not in the previous shot. (00:40:40) 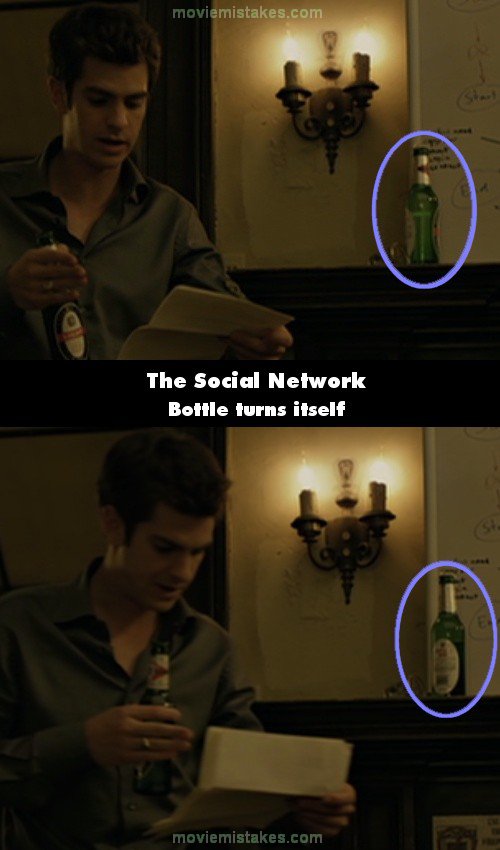 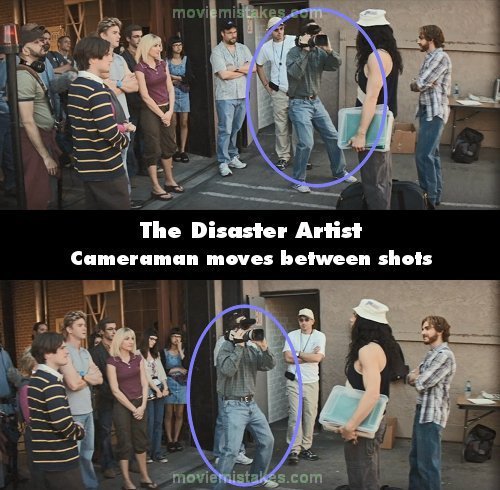 Continuity mistake: When Tommy gathers his crew on the first day of shooting and has Marcus come to film him for the behind the scenes, Marcus starts to step to the side past a line on the ground and goes over it. Camera cuts to Tommy shouting "okay!" and then back to Marcus he's suddenly more in front of Tommy again where he had just moved from. (00:44:00) 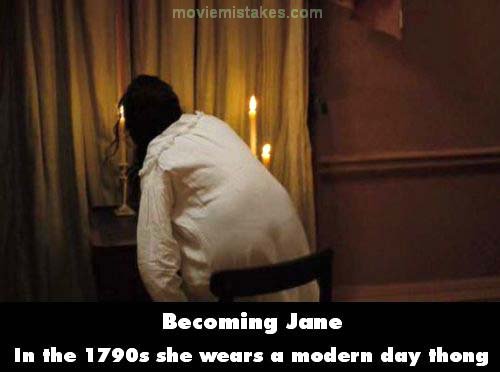 Revealing mistake: In the bedroom, when Cassandra asks about what Jane has been writing and Jane answers, "Just something I started in London", when Jane gets up and moves to the table, it is obvious that she is wearing a g-string under her nightgown.