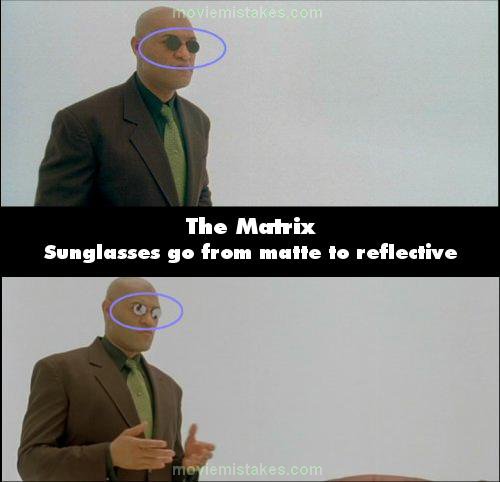 Deliberate mistake: When Neo and Morpheus are in the construct place (where it is all white), you can see that Morpheus' glasses are a matte grey and then a second later they are totally reflective. [The shot where Morpheus has flat black glasses was shot with a steadycam. A cameraman using a special camera strapped to his body walks in a snaking path from behind Neo, to behind Morpheus. He passes in front of Morpheus at least once. His glasses were painted flat black to prevent the reflection of the steadycam operator showing up on film. At the end of the shot, you can see the back side of the lens. While doing this scene and saying his dialogue, Laurence Fishburne couldn't see anything.] (00:38:10)

All the pictures for The Matrix