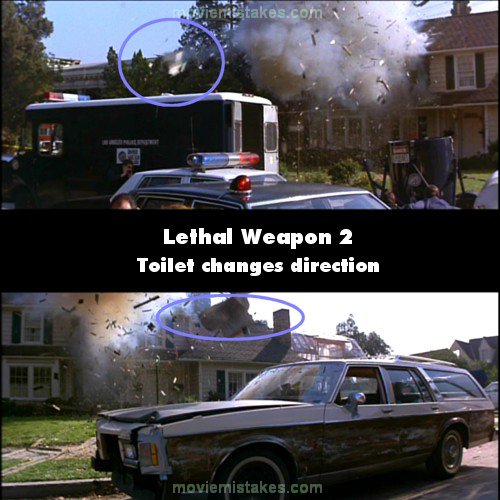 Continuity mistake: When the bathroom explodes, from one angle we see the toilet come sailing out over the roof of a police truck parked at the front of the house. While the angles make it a bit tricky to judge, there's a definite leftward trajectory. We then cut to a closeup of Murtaugh's car, and the toilet lands on it as if it was flying to the right. Even if the angles are misleading, in the first shot the police truck and other cars are parked to the right of the exploding window. In the shot of Roger's car he's also parked to the right, but without all the cars visible around it which there should be. (00:57:15)

Suggested correction: The toilet is flying straight out and straight towards the car - you can see this from the perspective of the interior of the car prior to the toilet becoming visible. Next the toilet is flying towards the area in front of the police van, not over it. And the car is parked in front of the van. When we see the car again, the van and other police cars are out of frame, so they can't be seen.

All the pictures for Lethal Weapon 2