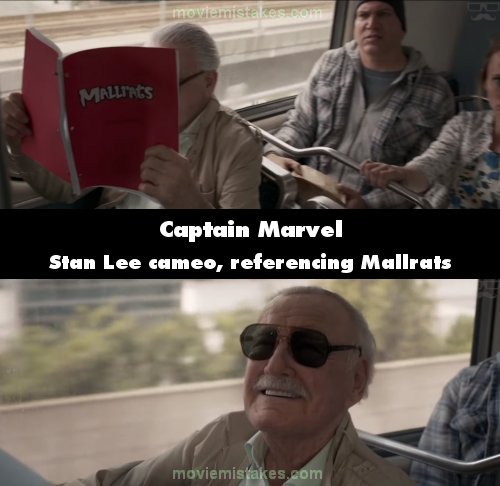 Trivia: Stan Lee's cameo actually references another cameo he made as himself, in 1995's Mallrats - he's reading the script for that on the train. This marks the first time he's explicitly himself in a Marvel Cinematic Universe film (he identified himself as Stan Lee in Fantastic 4: Rise of the Silver Surfer), not just a random character. In fact Guardians of the Galaxy, Vol. 2 confirms he's actually playing the same character in every cameo, a Watcher Informant, roaming the multiverse and reporting back his discoveries. And given he's reading the Mallrats script here, that means Stan Lee himself was actually an alien being all along, observing humanity and others. And of course that means the real Stan Lee exists in the MCU, so created comics based on characters who really exist, albeit maybe in another universe...but you could go on like that forever.

All the pictures for Captain Marvel