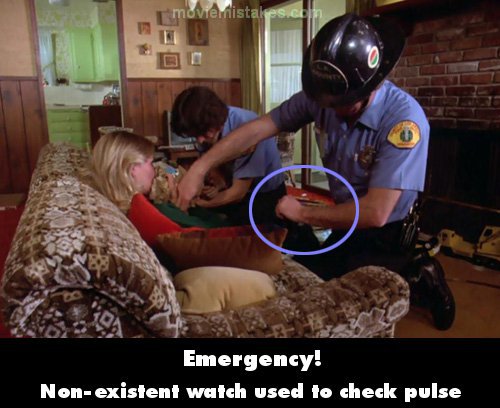 Other mistake: When Johnny and Roy are at the house with the three wild, obnoxious boys who terrorized their sitter, Johnny takes her blood pressure with the cuff, while Roy takes her respiration and pulse as he looks at his wrist for the second-hand countdown, but the problem is that Roy isn't even wearing his watch, and the actor has a bizarre look on his face when he looks at his naked wrist. He then tells Johnny that her pulse is 140 and respiration is 35. When the ambulance attendants arrive, Roy is wearing his watch. If he had his watch he should have used it for the pulse and respiration.

All the pictures for Emergency!