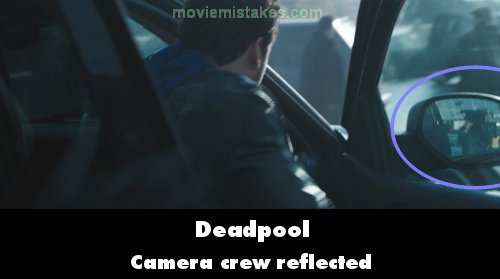 Visible crew/equipment: After Colossus and Negasonic Teenage Warhead leave the manor, the scene cuts back to the bridge where several gunmen are shown exiting cars and begin approaching Deadpool. In one of the shots during this, a gunman is shown exiting the passenger side of a car, with the camera placed behind him. In the shot, the reflection of a camera, cameraman and boom mic are visible in the wing mirror. (00:10:15)

Casual Person
4
All the pictures for Deadpool