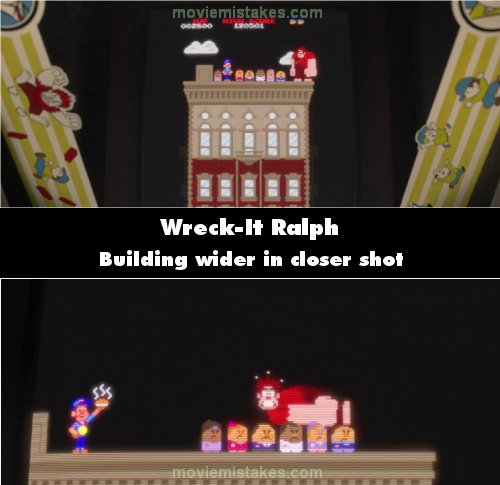 Deliberate mistake: When Felix is about to receive his first medal, a few things change in a cut to a close-up. The building has grown much wider (32 notches under the roof compared to 22 before), giving the Nicelanders room to carry Ralph before throwing him, when previously Ralph was already against the edge. Additionally, a pair of large clouds has popped into the middle of the screen to cover the medal before it appears, which may have been considered too distracting to include in the previous shot. Later on, the medals which are engraved with Felix's name in-game instead bear a bas-relief hammer and gain a white stripe through the center of the ribbon when shown in 3D, a rather drastic change for what is only meant to be a view in greater detail. (Official recreations of the game work around the first issue by reducing the distances covered by objects on the roof to begin with.). (00:01:50)

All the pictures for Wreck-It Ralph