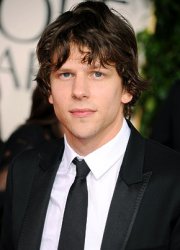 Yeah, the title still hasn't been confirmed, but it's far and away the best option, so I'm sticking with it. Variety is reporting that Warner Bros. has cast The Social Network's Jesse Eisenberg as Lex Luthor and The Lion King's Jeremy Irons as Alfred in the now-2016-bound superhero film.

In the 3 minutes since reading this news I've swung both ways, metaphorically speaking. Not on the Jeremy Irons front, who seems like an unusual but perfectly viable option, but Jesse Eisenberg...hmmm. Initially skeptical, I've started wondering whether a bald and more sociopathic cinematic Mark Zuckerberg might just work. I feel he's too young, but then Michael Rosenberg was pretty damn good in Smallville, so I'm coming around to the idea. Time will tell - sadly quite a lot of time after its recent delay, but here's hoping it just leads to a better film.

A Million Ways to Die in the West red band trailer