Some of the most blatant Transformers mistakes - click for more! 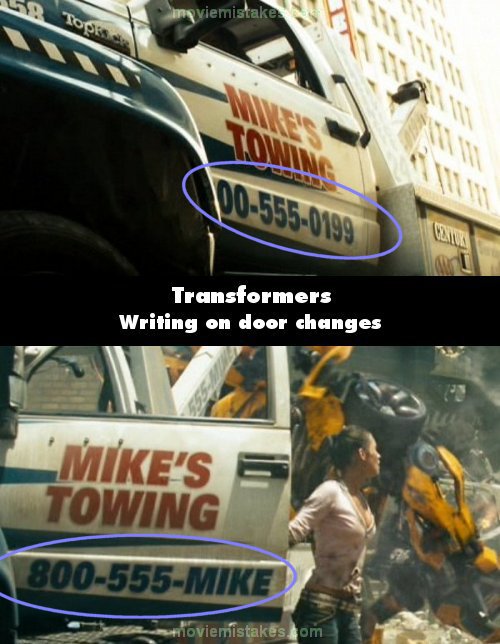 At Hoover Dam, when the soldiers salute Keller the clock reads 10:00, then as Keller, the soldiers, Maggie and Glen walk away in the background, when Simmons tells Sam that they got off to a bad start the clock reads 11:35, and next shot when Banacheck interrupts it reads 11:43. Also when Simmons talks to Mikaela and Sam the word "Nevada" is gone and it only reads "Time" under the clock. Then when Banacheck says, "Come with me, we'll talk about your car," the word "Nevada" is back under the clock. 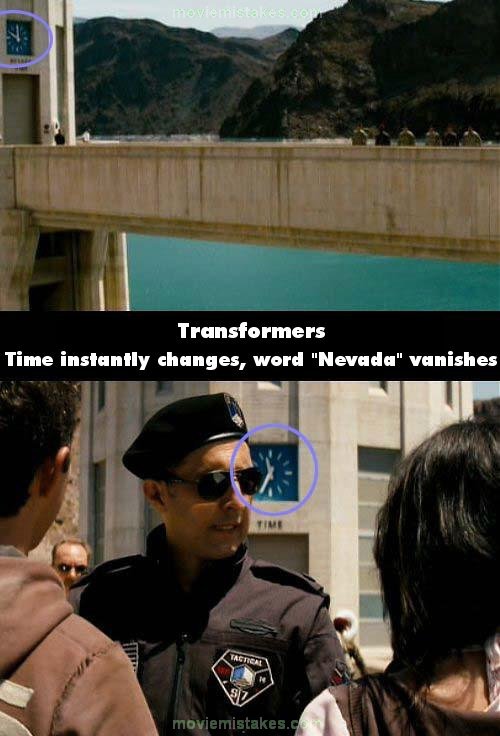 After class when Sam rushes to his father, who is waiting in his car, and tells him that he got an A-, the license plate is affixed to the front bumper. At the start of the next shot, the front license plate is gone, but it then reappears when they arrive at Bobby B's. 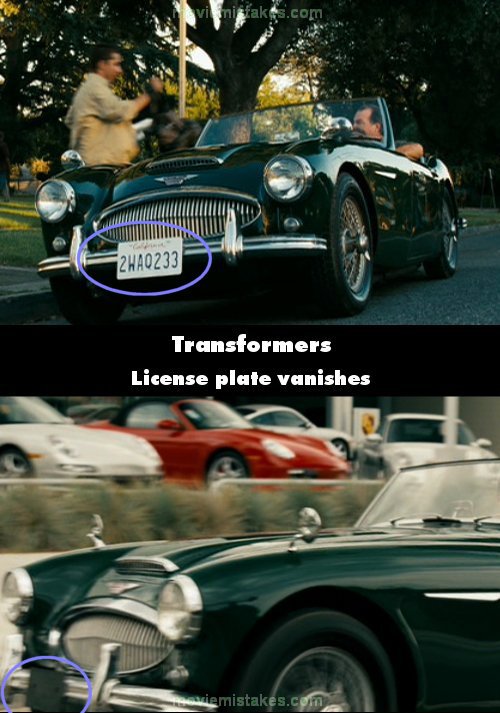 During the chase scene on the highway, when Sam says, "It's the same cop," they pan to a wide shot to show the whole freeway with the cars on it. All of the vehicles are on the wrong side of the freeway. When looking out of the back of his car, you can see the fronts of all of the cars coming towards the camera, and you can see the text on the signs facing the camera as well. You can also see crowds on the flyover, watching the filming. 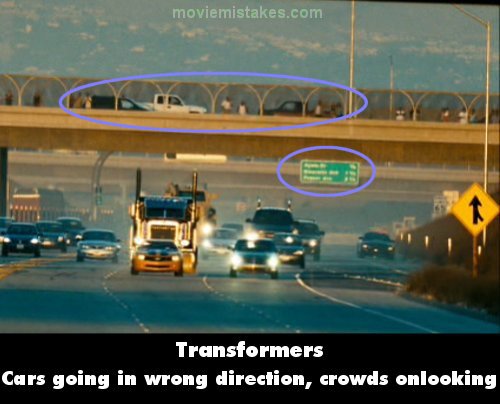 At Bobbie B's, when Sam first opens Bumblebee's driver-side door, the gas pump's white steel guardrail is directly behind him, aligned with the driver's seat, but when all the windows shatter, Bumblebee's front fender is aligned with the guardrail, though Bumblebee has not moved. Same goes for the VW Beetle beside the Autobot. 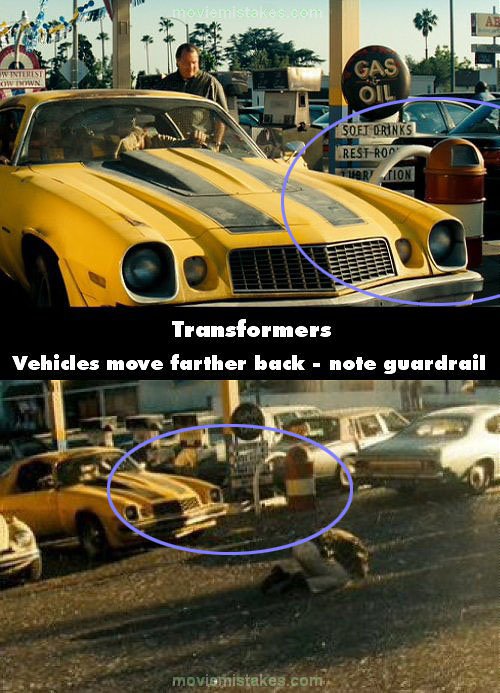 As we hear Prime explaining, "They're a young species, they have much to learn," on the Hoover Dam, S-Seven's SUVs pull up to the curb and doors open, right beside the vertical guardrail posts with the horizontal beams. In the next close-up, all of the horizontal beams have vanished. 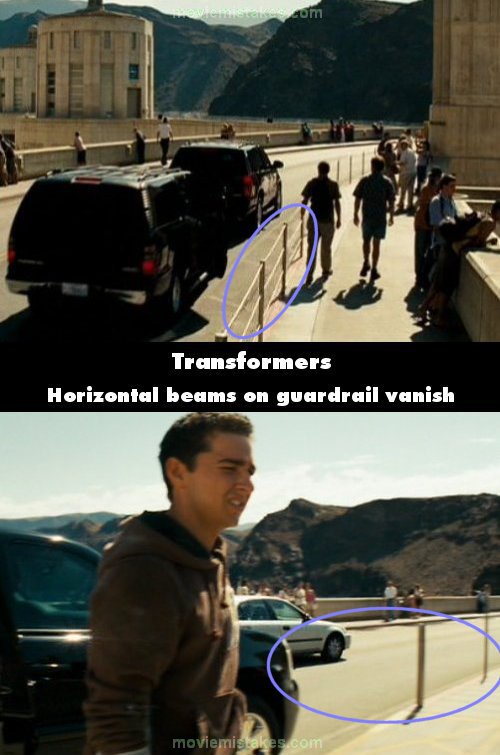 When Sam grabs his mom's pink bike, there is nothing in the white basket at the handlebars as he flees from Bumblebee. However, at the start of the shot just before the tire hits the broken concrete, a square pink pillow suddenly appears in the basket, before flying out as Sam flips over. 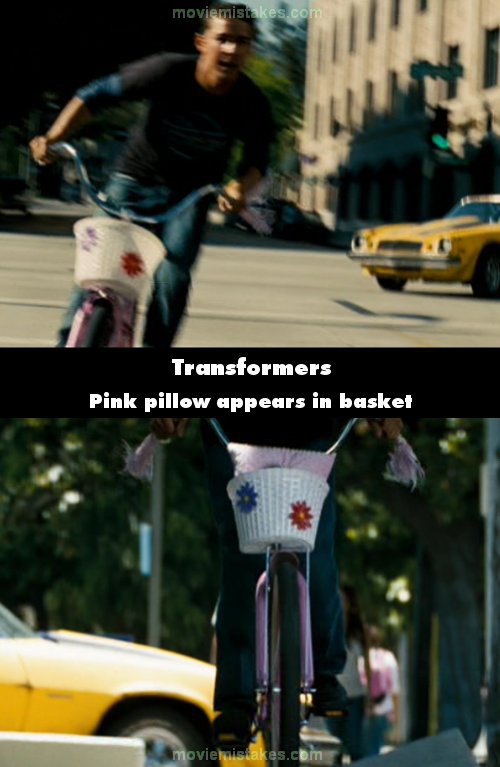 When Agent Simmons takes Mikaela and Sam into custody, the headrests in the SUV vanish when Prime shows up. The driver's headrest is visible just after they enter the car. When Sam says, "My car had been stolen, from me, from my home," and when Simmons asks, "What do you kids know about aliens?" the headrest behind Sam is visible, among other moments. 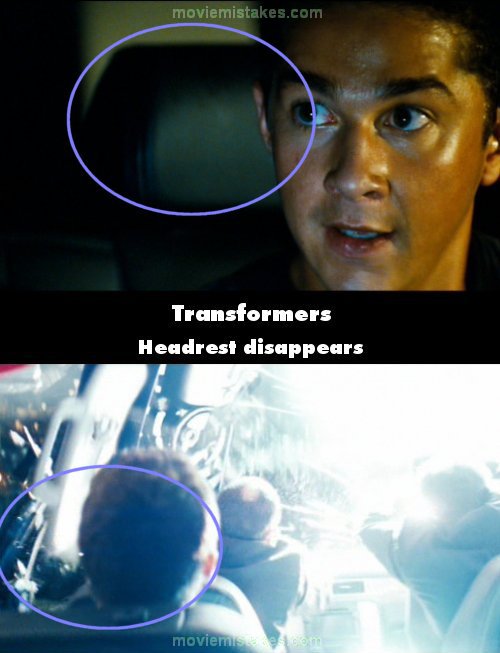 When Ron (holding a flashlight and lantern) is looking through Sam's bathroom window, saying, "Judy, better call the city. We got a blown transformer...," there is no windowbox under that window, which was there earlier. Yet when Prime says "Ironhide, you know we don't harm humans! What is with you?" the rather large windowbox full of flowers is back up under that bathroom window. 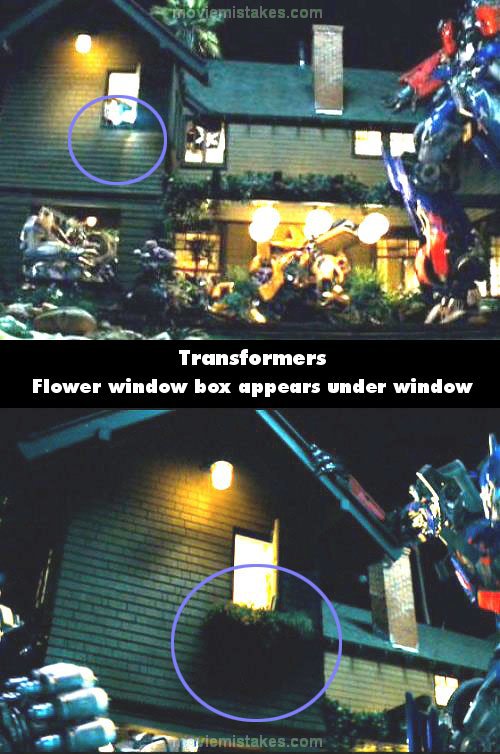 After Sam knocks Mikaela off her moped, they are both on the ground right beside the moped when Bumblebee shows up, but in the overhead shot as Sam helps Mikaela up the moped is gone, not moved, just gone. 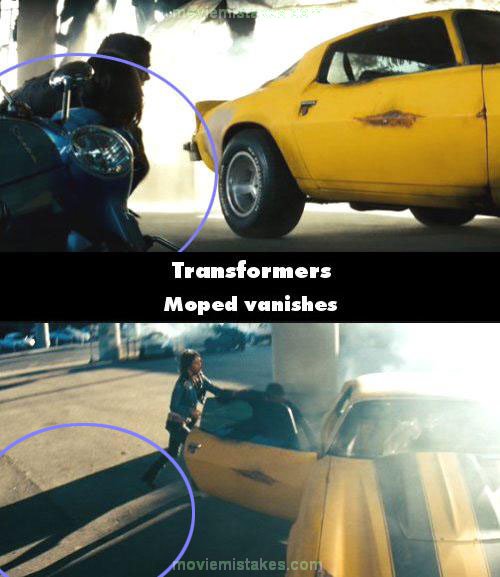 When the troop is flying in the helicopter at the start of the movie, Epps is not wearing sunglasses. When it cuts back to him, he is, then again it cuts away and back several times and you can see an indentation on the side of his head where the Oakley sunglasses were. 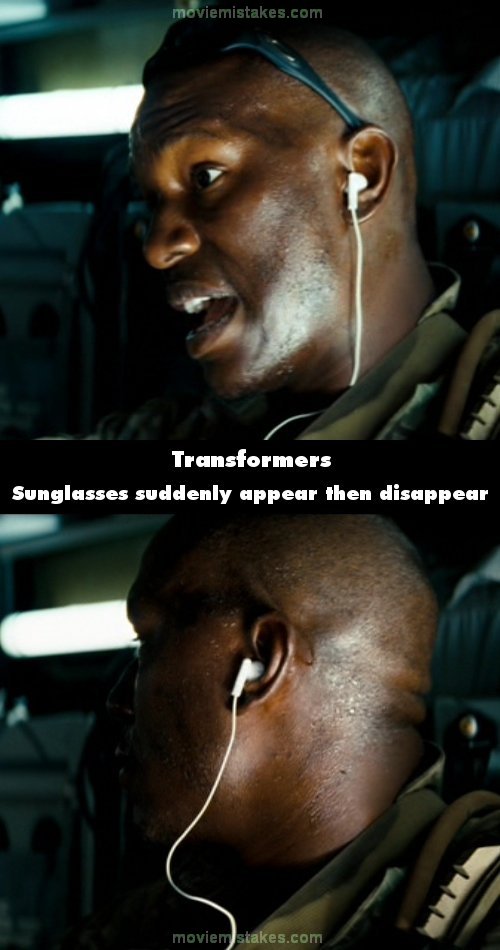 When Prime lifts Mikaela up to Sam's bathroom window, there are two baseballs in acrylic display cases and another object (looks like a vintage camera) on the windowsill (beside the tub). Then when Sam runs to that window and sees the Autobots parked as if it were a "truckstop", all those items disappear and are replaced by two small overturned flowers pots. 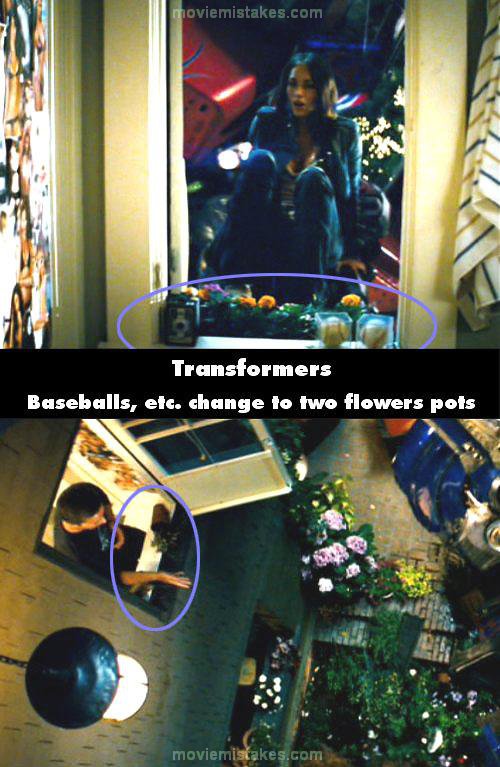 When Sam is looking at Bumblebee at the car lot, he wipes some of the grease off of the Autobot insignia. When Bumblebee blows out all the windows, all the grease is gone. 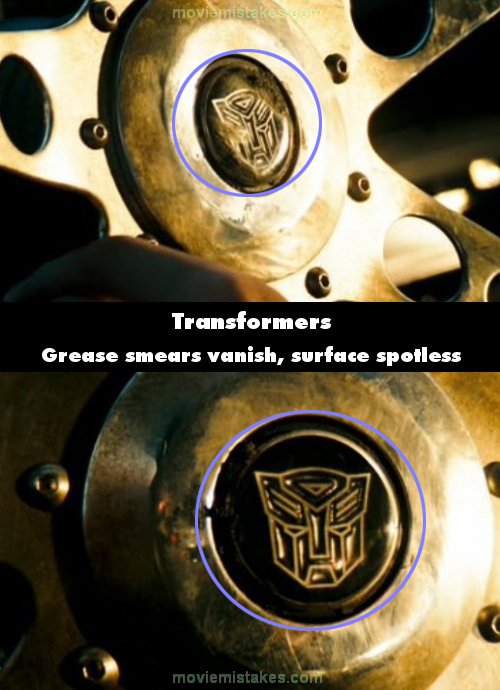 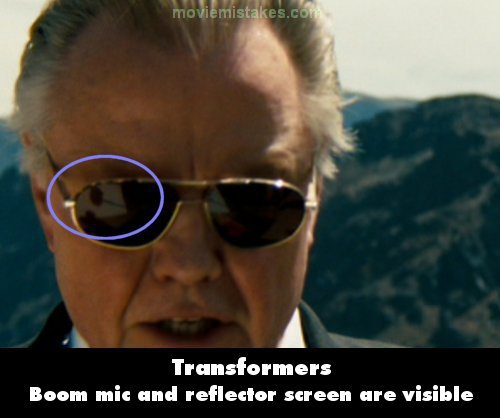 In this movie, we see a close up shot of Mikaela's hands in three separate scenes. The first is a shot from behind Mikaela and Sam where they grasp hands and the camera closes in on that. You see Mikaela's short nails, with chipped red polish. The second time we see her hands is a shot where she covers her open mouth with both of her hands in shock. Her nails are unpolished. Finally, the third time is during the ending sequence where both she and Sam have been thrown to the ground near each other. Mikaela stretches her hand toward him, they touch fingertips, and the red nail polish is back. 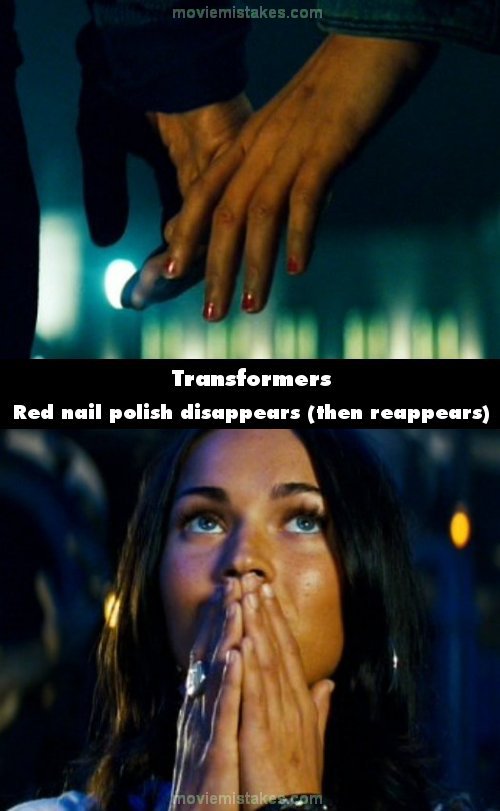 Thanks to The Daily What, Bullz-Eye, Tengossip, Action Flick Chick, The Bachelor Guy, Gunaxin, TransformersFans.com, Transformers2.net and Filmrot for linking to this post!