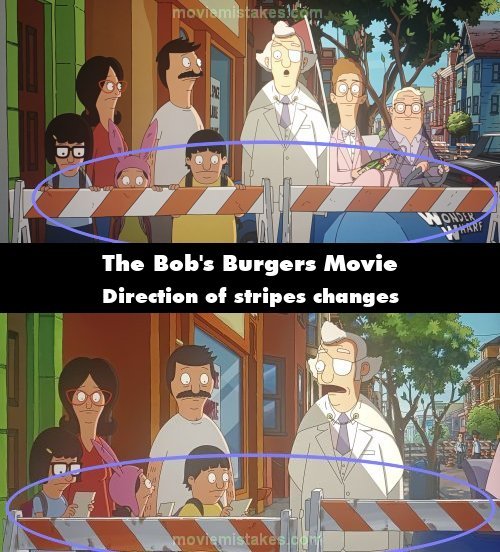 Continuity mistake: After the huge sinkhole appears in front of Bob's Burgers, there are numerous striped safety barriers on the street, and in the following shots the direction of the stripes change to the opposite direction on some of the barriers. (00:11:30) 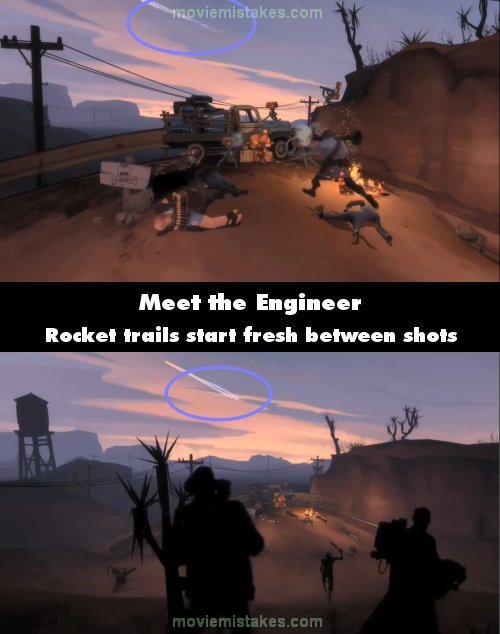 Revealing mistake: When the Level 3 Sentry is firing up into the air for no apparent reason, it fires some rockets with a clear defined smoke trail behind them and disappear off screen. Then the shot jump cuts to further away and suddenly the smoke appears again, but the end of the smoke trails are solid and crisp indicating the animators used the smoke animation as if the rockets had just been fired from that spot... in the middle of the sky. (00:01:10) 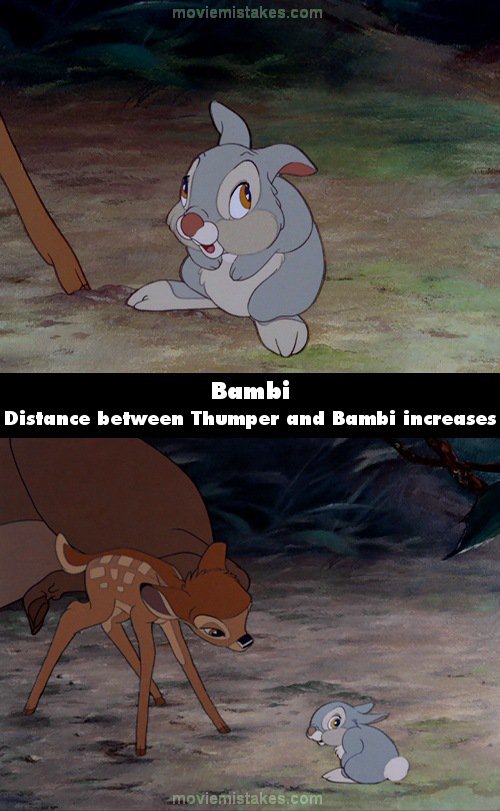 Continuity mistake: When Bambi attempts to walk for the first time, Thumper calls him "kinda wobbly." Bambi stands a few inches from Thumper in one shot, but between cuts they spread a few feet apart from one another. (00:06:50) 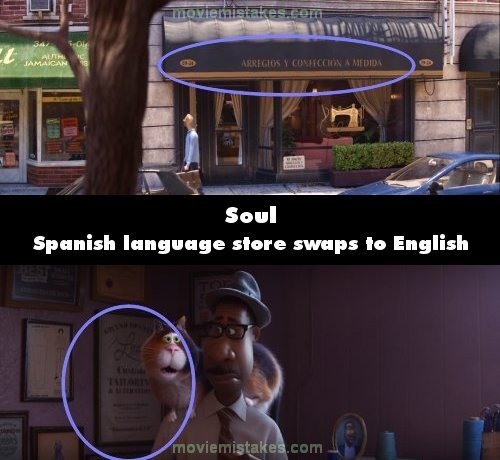 Deliberate mistake: In the Spanish release, the name of the family store is written in Spanish, but inside the place it's in English everywhere. This is a very common mistake in foreign kids' films released in Spain. 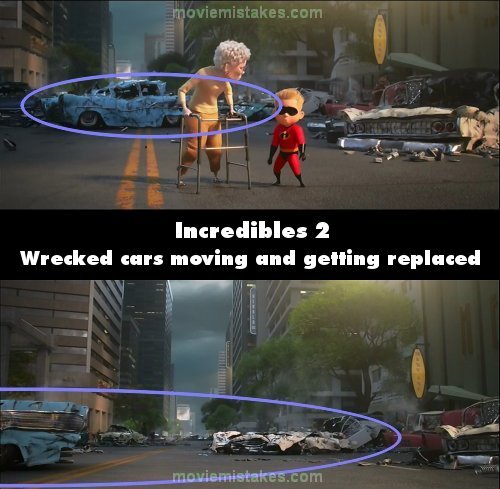 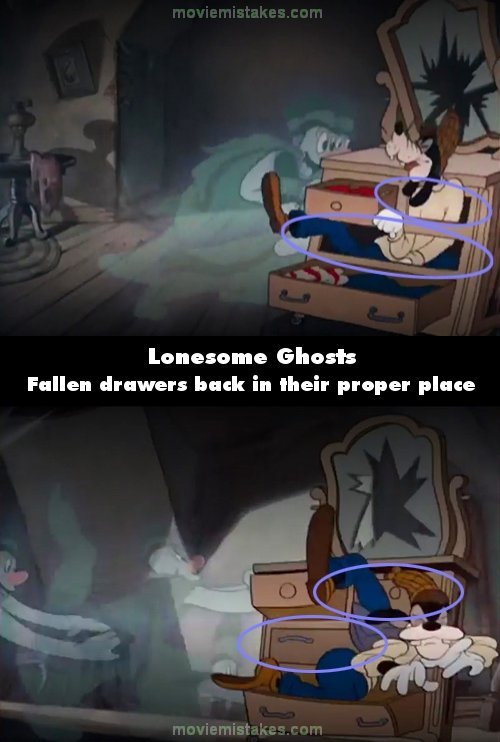 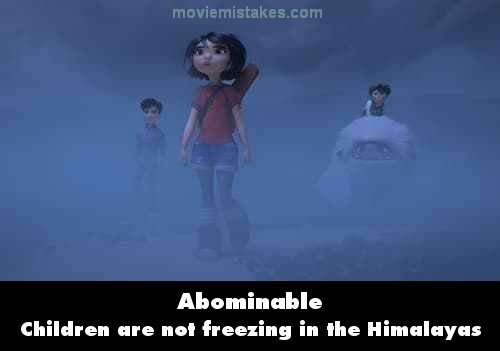 Other mistake: When the characters go to the Himalayas, the whole time, like for 20 mins, including the confrontation scene, they are all wearing casual, short-sleeved shirts. You can see Mr. Burnish's henchmen wearing winter clothing, while the main characters don't freeze to death. They only start getting cold after a long time. 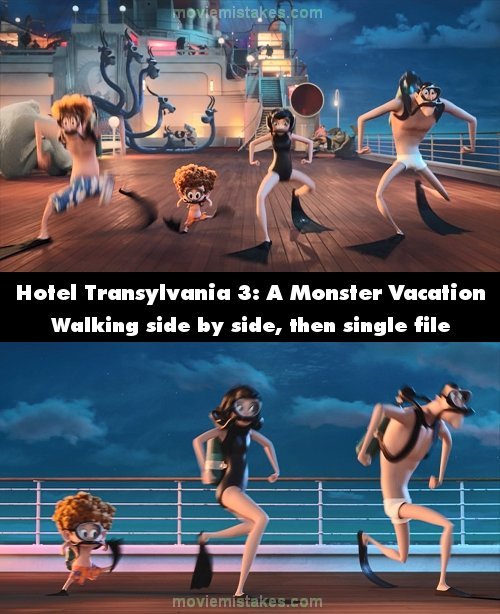 Continuity mistake: Before diving down to see the underwater volcano, Dracula, Mavis, Dennis, and Johnny are walking on the deck in their scuba gear. They are walking side by side, but in the next shot they are suddenly single file. (00:36:55) 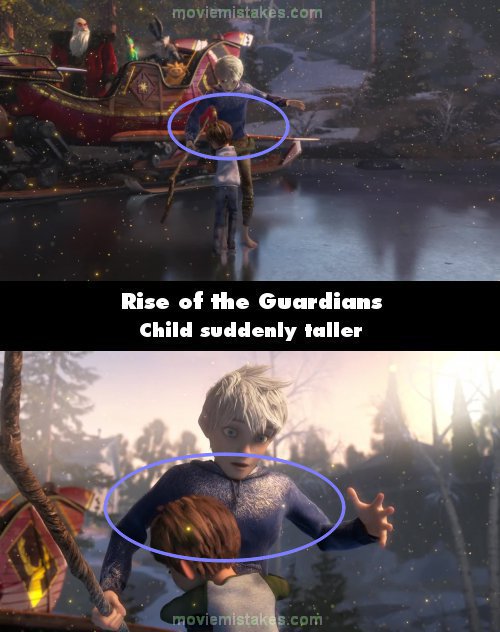 Continuity mistake: At the end of the movie, before the Guardians leave, Jamie rushes over to hug Jack. In the first shot, the top of his head nearly reaches Jack's ribcage. However, in the following close-up shot, Jamie is almost at the same height as Jack's shoulders. (01:27:30) 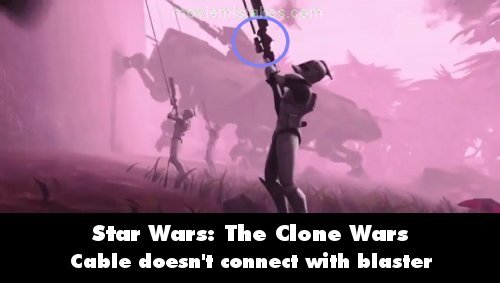 Revealing mistake: When Anakin, Ahsoka, and the clones begin their ascent to the monastery on planet Teth, the ascension cable of one clone trooper (second from the front when the shot begins) is not animated correctly and a gap can be seen between the end of the cable and the clone's blaster. (00:35:35) 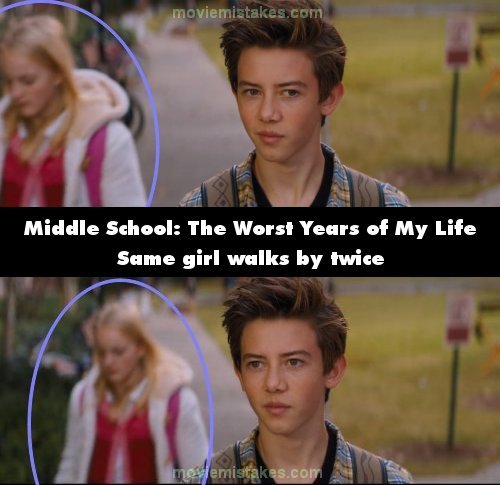 Continuity mistake: Rafe has just met the bumbling fool that is his principal: as Leo sneaks out of the building to meet them, behind Rafe a girl wearing white and pink is walking past them and getting into school. Several seconds later as the principal has already begun lecturing Rafe, the camera is back on him and the same girl is again walking behind him and getting to school. (00:07:30) 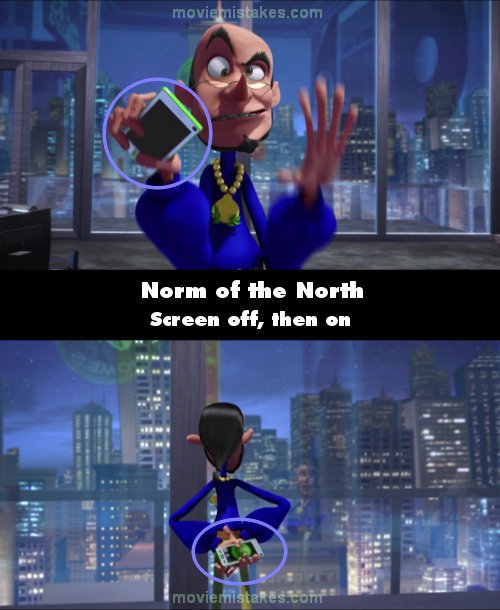 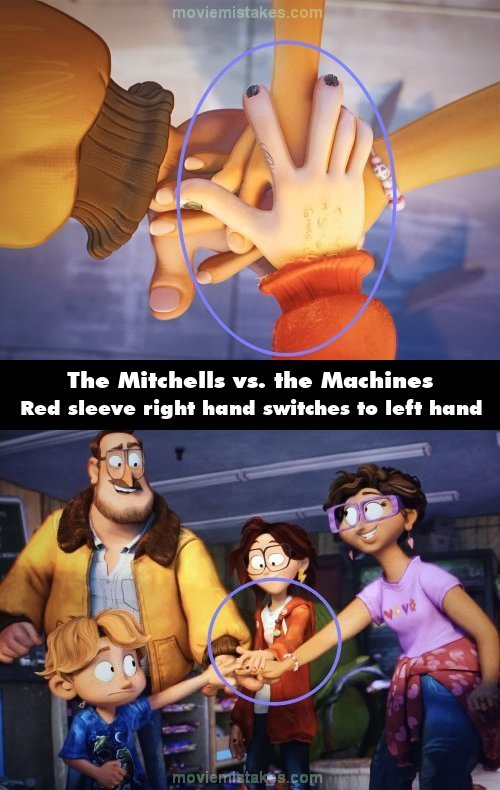 Continuity mistake: While at Dino Stop, Katie convinces her dad not to play it safe and to take a chance to save the world. Rick agrees and extends his left hand for the "all hands, Mitchell family on three." In the closeup we see Katie put in her right hand, but in the wide shot Katie's left hand pulls out. Also, note that in the closeup both Katie's and Aaron's positions between their parents are switched. (00:45:00)

More The Mitchells vs. the Machines mistake pictures 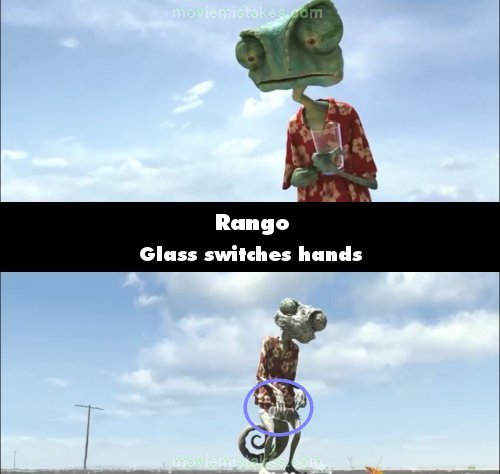 Continuity mistake: When Rango is stranded in the middle of the road, he is clutching a drinking glass in his left hand. For the rest of the scene (starting from when he molts), the glass switches to his right hand. 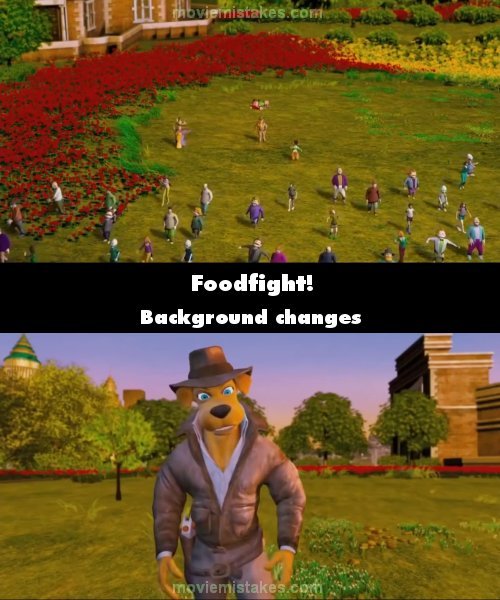 Continuity mistake: As the crowd of people in the park begin to leave, in the wide angle shot, watch the background behind Dex. There is a large quantity of red flowers, a building to the left of shot in the far background and a forest further back than the flowers and the building. The shot cuts to Dex saying "The real secret is that I am scared out of my mind Dan" and the entire background changes. There are now trees that have suddenly appeared behind Dex in the background, the red flowers are now way further back than in the previous shot and a building has suddenly appeared on the right hand side of the shot, while the building to the left of shot shown in the previous angle has moved to another part of the park, as shown when Dan tells him he can do it with him to help him. (00:04:35)

Constantine City of Demons: The Movie (2018) 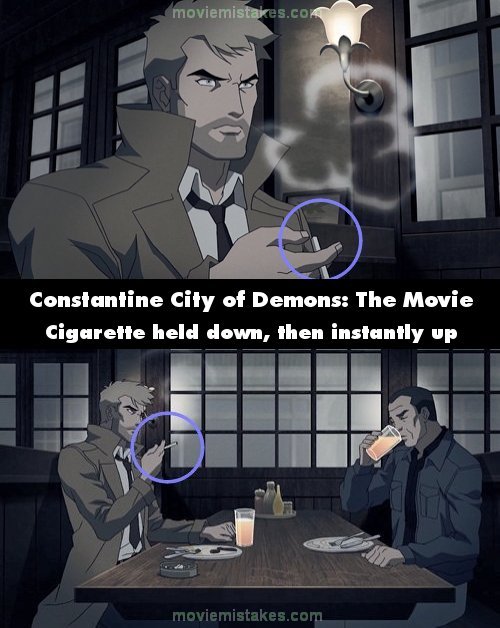 Continuity mistake: At the table when Constantine is talking with Chas, they mention him throwing up on his aunt at a wedding and Constantine says he thought she took it fine. He lowers his hand with his cigarette pointed down in the close up. But in the next angle it's suddenly pointed up. (00:05:35) 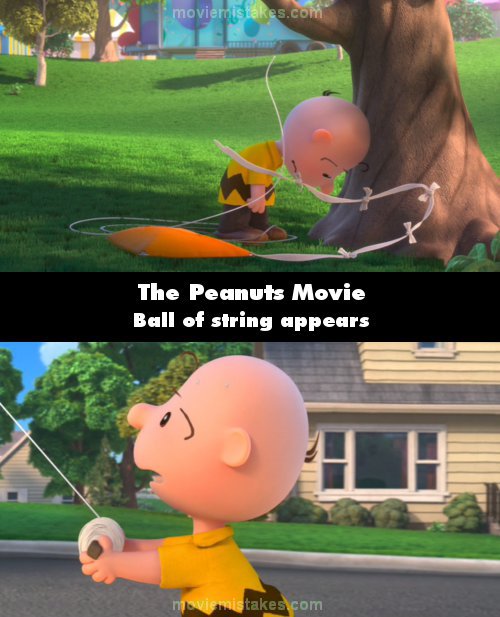 Continuity mistake: This is near the end of the movie when Charlie Brown is running to catch the Little Red Haired Girl before she boards the summer camp bus. As Charlie encounters obstacle after obstacle he runs into the "Kite Eating Tree" and asks for help. A kite falls down and he gets tangled up in the string and he is pulled away. There is no ball of string at the end. Several cuts later when everyone is amazed that Charlie Brown is actually flying a kite and following him, a ball of string magically appears and Charlie Brown is holding it while running and flying the kite. 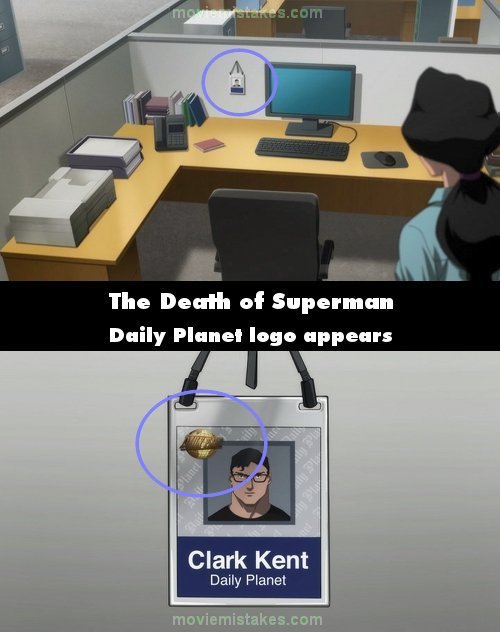 Continuity mistake: As Lois is looking over Clark's desk, the camera zooms in on his press pass before cutting to a close up of it. In the close up, the large Daily Planet logo appears on it between shots. (01:15:50) 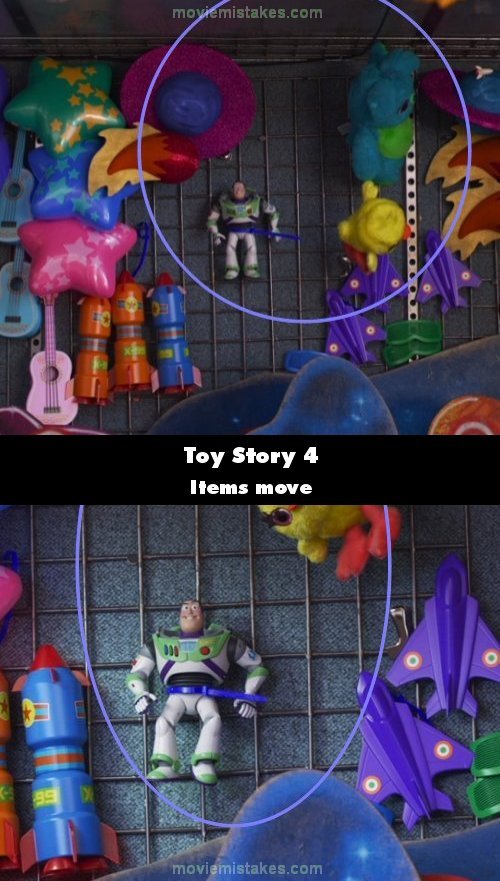 Continuity mistake: When Buzz is first put on the prize board at the carnival game, Ducky and Bunny are hanging further down and Ducky is pretty much level with Buzz. Later on, they are hanging higher up and Ducky struggles to reach Buzz when trying to kick him. (00:34:22 - 00:43:00) 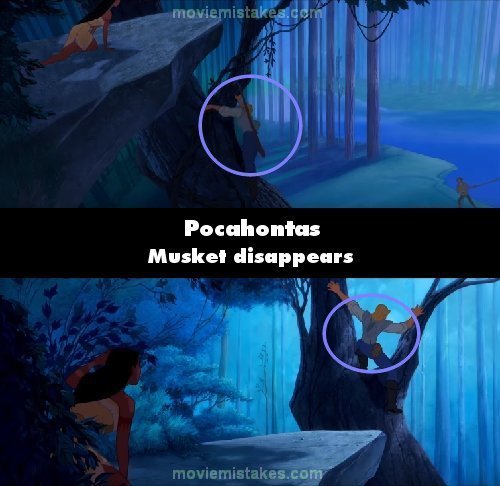 Continuity mistake: When Pocahontas sees John Smith for the first time, John is climbing up a cliff face and then a tree. You can see his musket strapped to his back as he's climbing. But after he tells Thomas he's getting a better look and then is shown in the tree, his gun has vanished.