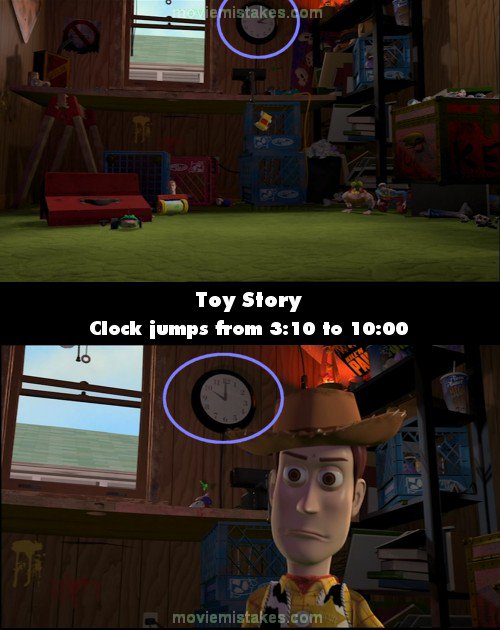 Other mistake: It's been mentioned that Sid sets his clock for 8:25 and it goes off at 7:00. Here's some more errors for Sid's crazy clock physics. When Woody is saying "Psst" to Buzz from inside the blue plastic basket, the clock on the wall says 6:25, yet the alarm clock next to Buzz says 6:55. It goes off 5 minutes later and after Sid takes Buzz out of the room, the clock on the wall has changed to 3:10. When Woody is talking to Sid's toys a minute later, the clock now reads 10:00. The maximum amount of time that passed between the already wrong 3:10 and the 10:00 is 5 minutes. You can tell because Sid wanted to launch Buzz strapped to the rocket ASAP and Woody wanted to rescue Buzz from his current strapped-to-a-rocket state very fast. (00:56:45)

All the pictures for Toy Story