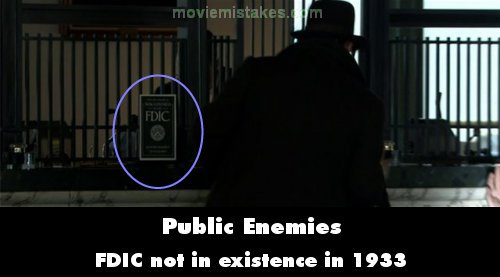 Factual error: Early in the movie, during a bank robbery, there is an FDIC sign beside the teller. Dillinger's bank robberies were mostly in 1933, he was arrested in January 1934. The FDIC was not enacted until January 1934, making it impossible for the bank to have been insured by the FDIC during the 1933 robberies. Additionally, in the same robbery, the teller displays $5 bills that are the current format (multiple colors, offset picture, larger numbers) which would not have been present at that time. (00:42:40)

All the pictures for Public Enemies