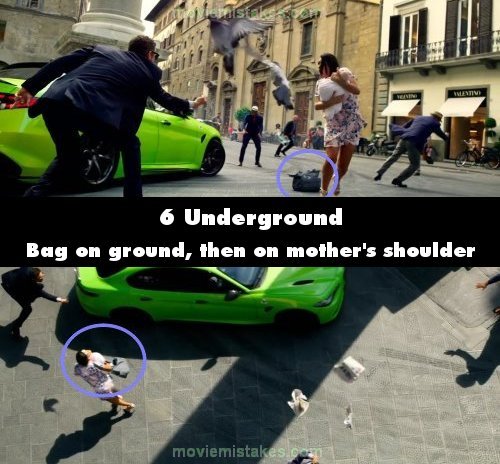 Continuity mistake: During the "Baby! Baby!" scene, multiple flubs happen. To name a few; in the POV shot they are this close to hitting the woman with the baby, but she is at a greater distance right after; in one shot her bag is on the ground and not on her shoulder; two pigeons fly in front of her, but in another take one even connects with her hair; people watching horrified by the monument and in the piazza itself appear and disappear between shots, Ryan Reynolds is sticking his head out in close-ups but is nowhere to be seen in the other angles. Finally, plenty of skidmarks are already visible on the asphalt. (00:06:30)

All the pictures for 6 Underground