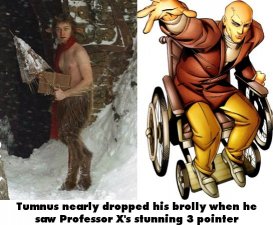 Yeah, OK, not quite, but the film news part of this blog is pretty much for my own (and hopefully your) amusement, rather than an up-to-the-minute desperate quest for pageviews, so you'll have to allow me the occasional bit of whimsy.

Anyway, in a slightly more accurate way, James McAvoy has been cast as Professor X (if I have to explain the Picard connection there's really no hope for any of us) in the upcoming X-Men: First Class, directed by Matthew Vaughn. This is the first official bit of casting news that's come out of the production, and I'm...intrigued. As with most people you're used to seeing with hair, it's hard to picture him bald (he'll have to be bald...won't he?), but acting-wise I think he's got the range, rather than being a generic pretty boy.

There's not a huge amount of information floating round about this movie - I'd hope it'll be a prequel rather than a reboot, but time will tell. There's also always the prospect that we'll see Xavier walking about before he was crippled by the alien Lucifer (oh yes, I can read Wikipedia), but that might be going back too far for the scope of this film.

10 Biggest mistakes in Sex and the City