A few of the biggest Twilight mistakes - click for more!

In the scene where Bella is in the hospital, when the camera is up close to her face, the breathing tubes are right by her eyes, but when the shot is far from her face, the tubes are sitting on her cheeks. 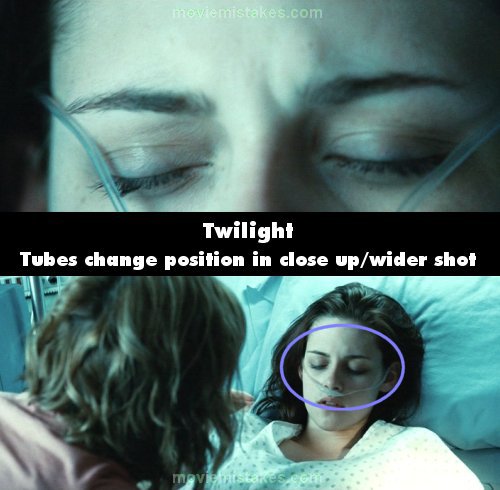 When Bella and Edward talk in the woods, Bella drops her backpack in front of a tree. In a subsequent shot, the backback has disappeared. 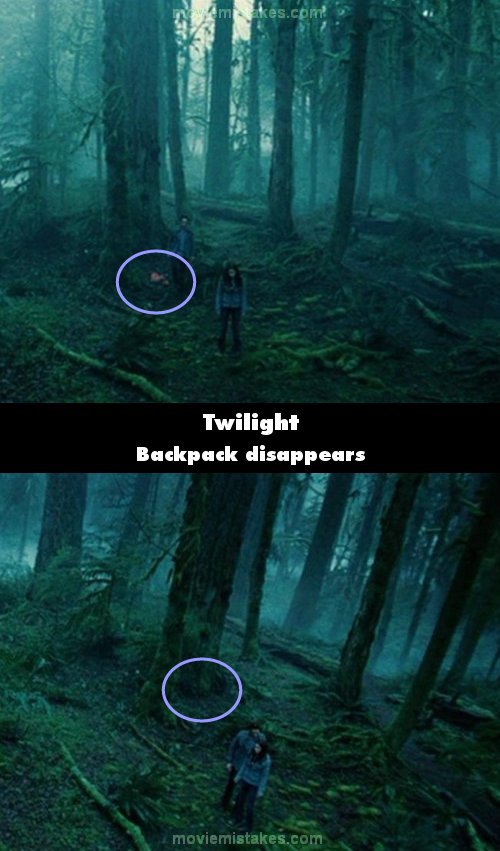 When Bella pulls up in her truck for her first day at Forks High, as the camera pans from her truck as she parks it into shot, you can see the camera and boom reflected in the triangular window. 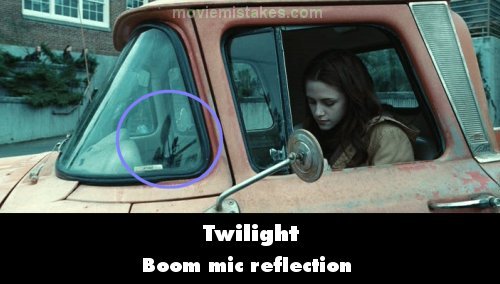 When leaving from the baseball scene, Emmett's jeep goes from being dirty on the sides with mud from the tires, to being clean. 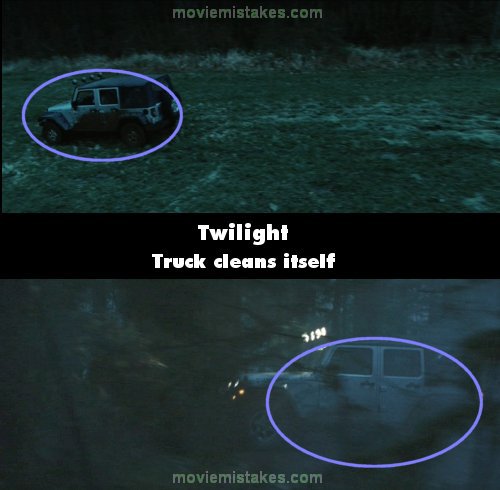 When Bella enters biology and Edward has finally returned, as she walks over to her desk the large book sitting on the edge repositions itself from sitting horizontally to vertically between shots. The bit of paper above it also moves closer to the edge. 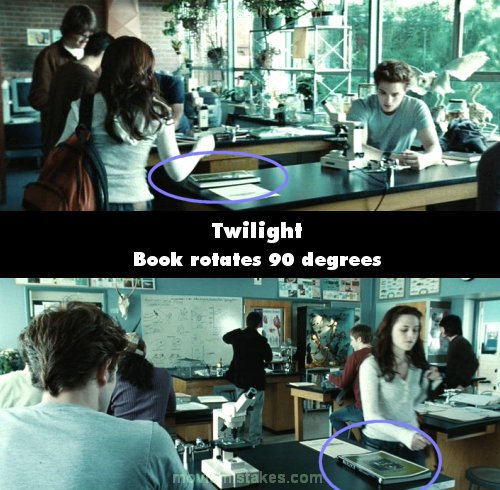 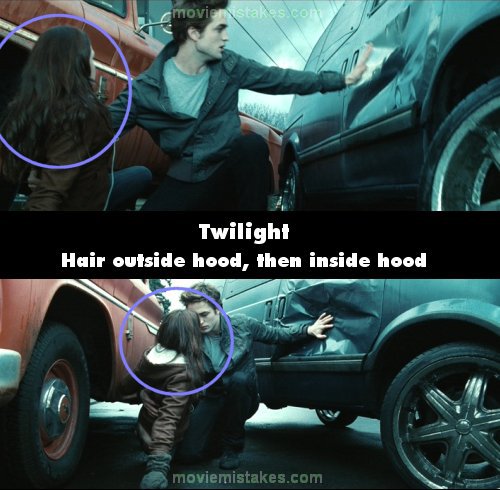 In the scene where Edward reveals what he is to Bella, the button down shoulder epaulette on his jacket goes from being unbuttoned to being buttoned throughout the scene. 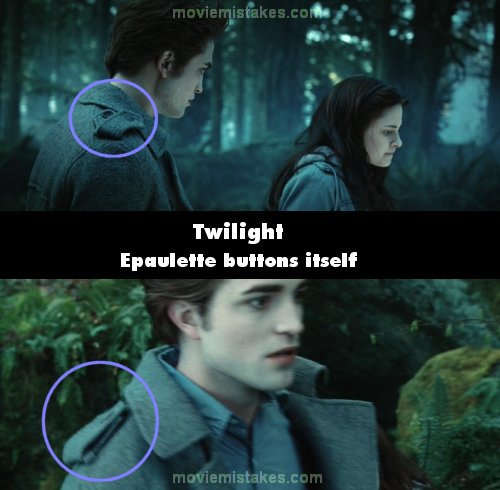 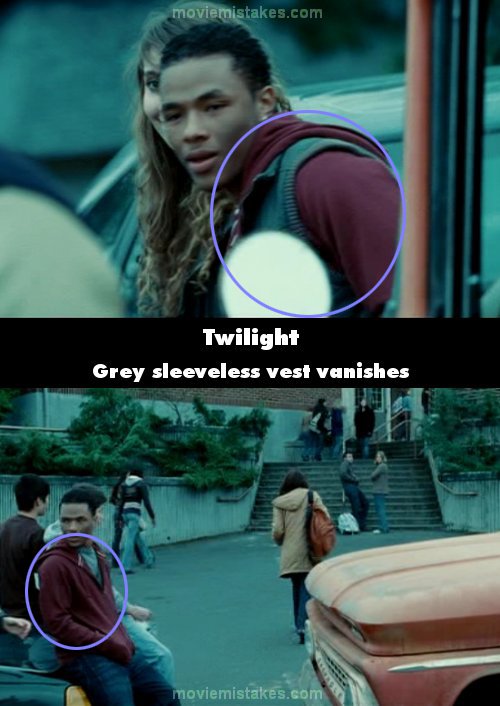 During the hospital scene, when Edward is "sleeping," his head goes from from leaning on one shoulder to suddenly on the other shoulder in the very next shot. 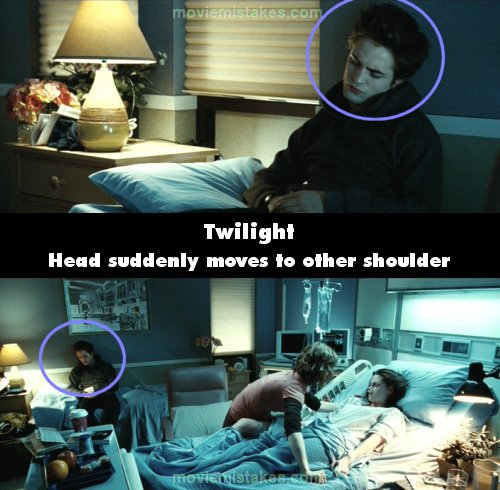 When Bella is at the hospital, the little plant by her left changes place. First it is under the lamp; later it is no longer under it. 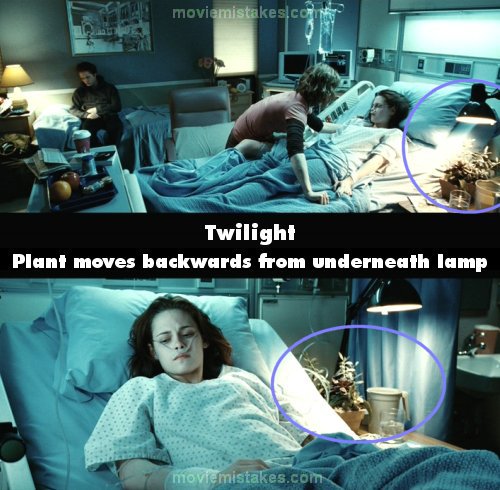 Huge thanks to newmoonmovie.org, hisgoldeneyes.com, bellaandedward.com, twilightguide.com, twilighters.org, and many others (can't list you all, I'm afraid) for sending this page so much traffic! While you're here, why not check out Robert Pattinson's page, or other popular mistake-ridden movies?