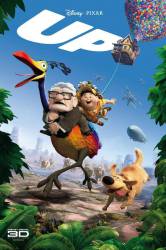 Continuity mistake: When the house first becomes detaches from its foundation and becomes airborne, Russell is nowhere to be seen, although every angle of the house is shown, including underneath, the front porch and the back porch. He knocks on the door and tells Carl he chased a "snipe" under the porch - but he cannot be seen after liftoff and prior to knocking. The same thing happens near the end, when Dug claims to have hidden under the porch.