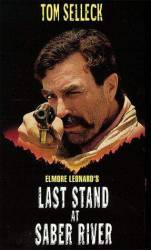 Factual error: Martha Cable is shown describing to a customer the process for converting a cap-and-ball Army Colt revolver to accept cartridges. While it is entirely possible that a gunsmith in Texas might perform such actions, the burning question is, "Why?" The only cartridges available were for a .32 caliber Smith & Wesson, or those for a .44 Henry repeating rifle, and such cartridges were virtually impossible to obtain in the South during the Civil War.