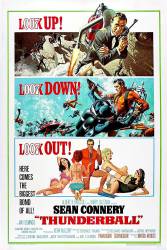 Other mistake: When the Disco Volante separates to escape the cruisers firing on it, the "cocoon" is seen facing the pursuing ships stern first. When the shot changes to show the gunners firing on the ships the back half of the "cocoon" has turned completely around; the gunners are firing from the separated mid section of the Volante and the stern of the "cocoon" is now facing away from the cruisers, making it easy to see which parts of the scene were filmed live and which were done in the studio.