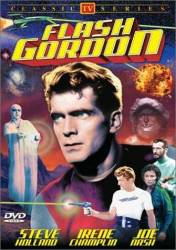 Flash Gordon and the Planet of Death - S1-E1

Revealing mistake: In the flashback of the scientists' fate on the planet of Death, the sole survivor manages to run away and avoid the ray of "Belfagore" (which is just a big flashlight). Problem is, he does not; before hitting Bending behind him, the beam fully lit up his back, but he suffers no adverse consequences, no dropping dead for Jefvus. (00:06:40)