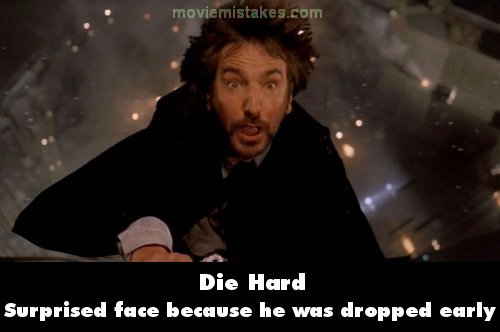 Trivia: For the shot where Hans Gruber falls from the top of the building, Alan Rickman was dropped by a stuntman from a 20-foot high model onto an air bag. To get the right reaction, the stunt man dropped Rickman on the count of two instead of three. Rickman said "That sounded like fun and so I decided to do it, I thought they were a bit surprised that I said I would and I was surrounded by people saying, 'You're mad, you're mad!' But no, it was fun. And it was the last shot, so if I'd broken my neck, they'd still have a movie."