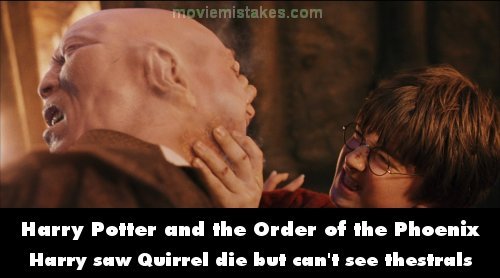 Plot hole: Harry can now see the thestral creatures because he witnessed Cedric Diggory's death in "Goblet of Fire." However, he should have been able to see the thestrals after Professor Quirrell died from Harry's touch in "Philosopher's Stone". Quirrell crumbles into dust (dying) while Harry is still conscious, watching, and fully aware of what he is seeing, thus allowing it to fully sink into his consciousness. Harry faints "after" Quirrell is dead and as Voldemort's spirit passes through his body. Nor does it only have to be a friend or loved one who dies before the thestrals can be seen - it can be anyone, including an enemy like Quirrell. There only has to be an emotional response to the death, which can be love, hate, fear, shock, etc. (In the book, Harry did not see Quirrell die, but that's irrelevant to the film).