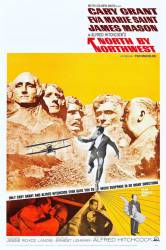 Revealing mistake: In the shooting scene in the Mount Rushmore cafe, a boy in the background puts his fingers in his ears, because he knows the gun is about to be shot. 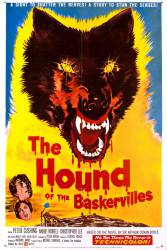 Continuity mistake: After Sir Hugo has stabbed the girl on the moor, no blood is visible on the knife he used, however after he drops it (because he is attacked by a hound) blood has now appeared on it.

More The Hound of the Baskervilles mistakes

The Four Skulls of Jonathan Drake (1959) 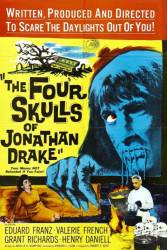 Revealing mistake: Near the beginning, when police Lieutenant Rowan is inquiring on the death of Ken Drake, there are only 4 men in the room, all facing one another in a wide shot. The camera cuts to a close-up of Dr. Bradford for a couple of seconds, and there is a distinct puff of cigarette smoke passing behind him, but none of the characters in this scene are smoking. Lieutenant Rowan does smoke later in the film (in fact, he's the only character who smokes), but he's not smoking in this early scene. Apparently, the close-up of Dr. Bradford was borrowed from omitted footage in which Lieutenant Rowan was smoking.