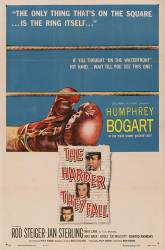 Continuity mistake: Near the end, Eddie knocks down a thug who tries to stop him from putting Toro into a cab. The man's hat falls off and lands on the concrete. He gets up as the cab drives away, then turns to retrieve the hat, which has now moved itself off the sidewalk and into the bushes.

More The Harder They Fall mistakes