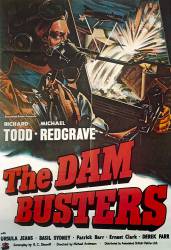 Trivia: A (corrected) entry states that a USAAF B-17 'Flying Fortress' bomber is visible in the film. In fact in some prints produced for release in the US irrelevant stock footage of a B17 was randomly cut into the film to make it more acceptable to American audiences. This was a deliberate alteration of the film done very much against the wishes of the producer and director, and it explains the 'error' - the contributor has seen one of the non-canon US prints.